The Mystery of Anthrax Island—what became of Dark Harvest activists? 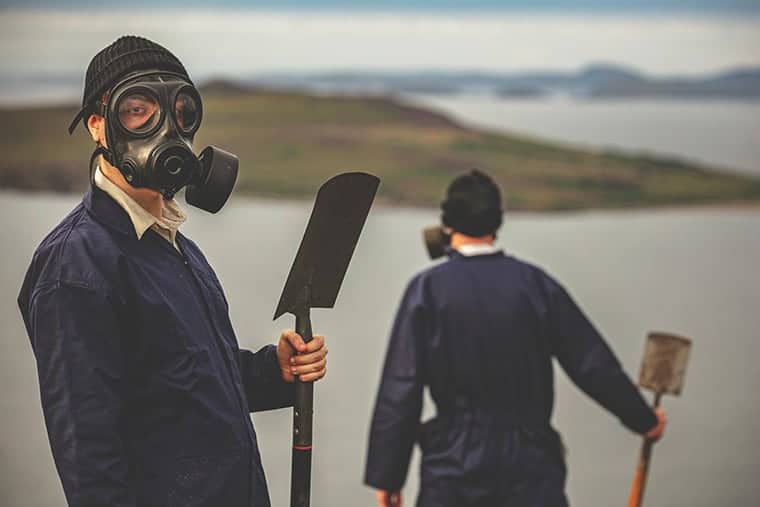 Who were the Dark Harvest Commandos who fought to clean up ‘Anthrax Island?’

New documentary The Mystery of Anthrax Island reveals an astonishing story of deadly bacteria, biological warfare, and a shady protest group. And it’s all played out around an unassuming small Scottish island.

Gruinard Island was taken over during the Second World War by government scientists from the Ministry of Defence’s Porton Down laboratory. There, they tested a deadly strain of Anthrax on sheep.

From 1942 onwards, people were forbidden to go onto the uninhabited island for fear of the spores they could inhale from the contaminated soil. Those spores had the potential to remain fatally potent for decades. Stern warning signs were erected on the island and the adjacent mainland and Gruinard was dubbed “The Island of Death” or “Anthrax Island”.

Almost 40 years later, the story of Gruinard took another major twist. This documentary reveals an extraordinary—and largely forgotten story—of a group calling themselves the Dark Harvest Commandos. In 1981, they claimed they had landed on the island and removed 300lbs of infected soil. They said they then left a small package of the potentially lethal substance just outside the perimeter fence at Porton Down. Their aim, they claimed was to force a clean-up of Gruinard.

A second package of soil was found five days later at Blackpool Tower—close to where Margaret Thatcher was staying at the Tory Party conference. A special police investigation found nothing definitive—and locals near the island said very little.

Mass movements and direct action scare the state
Read More
A few years later Ministry of Defence scientists began cleaning up Gruinard Island. By 1990 the island was declared safe, and now anyone can land there and explore it for themselves.

But what of the Dark Harvest Commandos? They were never found, leaving a last pithy note pinned to the door of the Scottish Office in Edinburgh to say they had called an end to their campaign.

But as The Mystery of Anthrax Island reveals, their messages contained more than just an end to their activities—and warnings with repercussions for today.

The Mystery of Anthrax Island is available now on BBC iPlayer

Porton Down - Britain leads the world in poison gases