This article is over 9 years, 7 months old
An exhibition at the Museum of London unearths the looted graves on which modern surgery was built, writes Dave Sewell
Downloading PDF. Please wait...
Tuesday 27 November 2012

When archaelogists dug around the grounds of the Royal London Hospital in Whitechapel in 2006, they discovered a long forgotten cemetery.

Many of the bones had been sliced, drilled and dissected. Others had been rejoined with metal wire or stained by wax.

This is where the Museum of London’s new exhibition on “Doctors, Dissection and Resurrection Men” begins. It tells of the grisly trade in stolen corpses that allowed modern medicine to develop.

In 19th century London the demand for skilled surgeons exploded. Migrant workers poured into the booming docks and industries. Their bosses took out hospital subscriptions because of the appalling level of work accidents.

Before anaesthetic or antiseptic, every­thing depended on the surgeons’ skill, speed and precision. And the only real training could come from cutting up corpses known as cadavers.

But since the 1751 Murder Act, only those hanged for murder could be legally dissected. The dishonour and humiliation of dissection was intended an extra punishment.

So almost every respectable surgeon made up the difference by cutting deals with a feared and hated underground trade in graverobbing.

In 1827 terrified patients at the Royal London raised the alarm as hospital graves next to their ward were robbed.

Five years earlier William Millard was caught in the act there. He died in prison while his wife Ann campaigned tirelessly to expose the hospital authorities. They had used him for years to supply bodies—only to let him take all the blame.

The freshest corpses were the most prized—and some graverobbers turned to murder. John Bishop and Thomas Williams were executed for killing a boy for dissection in 1821.

Vengeful crowds nearly broke down the doors to watch as they themselves were dissected. Pieces of their skin preserved for grisly souvenirs are shown here, while a gripping video installation tells their sordid tale.

By 1832 the panic over the “Resurrection Men” gave surgeons a means to push for a change in the legislation.

The Anatomy Act of 1832 authorised the dissection of any corpse unclaimed within two days of death—a fate often hard to avoid for migrant labourers whose relatives could be hundreds of miles away.

The establishment of workhouses in 1834 created a further supply of bodies. Dissection was still considered a dreaded punishment—but now for poverty rather than murder.

In the hundred years following the Anatomy Act, over 99 percent of corpses came from workhouses, hospitals and asylums. The act was finally repealed in 1984.

At the heart of this gripping exhibition lies a tragic contradiction. Dissection of the dead was a weapon to terrify the living poor. Yet it was the poor themselves who had the most to lose from untrained surgeons.

So vital advances in medical sciences were inseparable from a medical establishment preying on the very people they were meant to heal. 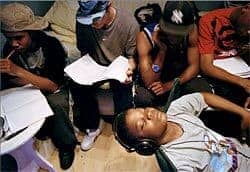 Don’t Call Me Urban! The Time of Grime