The Wind Rises: Miyazaki gets caught up in a swirling dream of war planes

This article is over 7 years, 8 months old
The Japanese animator’s final film The Wind Rises is, as always, strange and beautiful—but it opposes war through rose-tinted glasses, says Ken Olende
Downloading PDF. Please wait...
Tuesday 06 May 2014 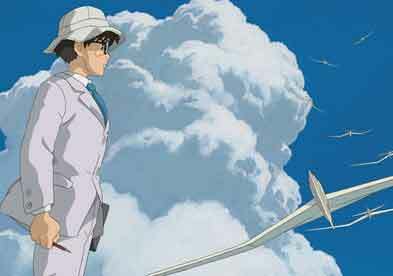 Scene from The Wind Rises

But as far as I know no one has made a film celebrating Willy Messerschmitt, designer of the crucial German ME109 fighter.

So it is a surprise to see a tribute to engineer Jiro Horikoshi, who designed the deadly Japanese Zero fighter. Probably more surprising is that the film is made by the great Japanese animator Hayao Miyazaki.

The Wind Rises, a pacifist film about the creation of a fighter aircraft, has created controversy in Japan. Some called it unpatriotic, others said it whitewashes the country’s role in the war.

In Miyazaki’s lush hand-painted style it follows the designer from his childhood dreams to the launch of his greatest creation.

Early on in the film Tokyo is flattened in the earthquake of 1923, with thick billows of black smoke and red flames. The scene foreshadows the terrible destruction of war.

Despite this the film is a love letter to changing technology—phones, buses, trains, ships and most of all aircraft. The reality of life at a drawing board mixes with long dream sequences.

But a film about engineering, the drive to war and incidentally tuberculosis is unlikely to appeal to the same young audience as the cute monsters of Miyazaki’s films My Neighbour Totoro or Ponyo.

The complexity and violence of Miyazaki’s films such as Princess Mononke always made them more suitable for teenagers or adults.

Uncertainty about what really happened makes The Wind Rises slightly uncomfortable. Miyazaki invents a melodramatic love affair taken from a popular novel—also called The Wind Rises—and a feisty sister. The film’s politics are pacifist, rather than outraged at imperial expansion.

Horikoshi did oppose the war—though possibly because he thought Japan could not win. He still went on to design many other fighters. The only discussion of the morality of the war is with a German opponent of Hitler.

The Wind Rises is to be Miyazaki’s last film. It remains a majestic, swirling meditation on the contrast between dreams and reality.

The Wind Rises will be in cinemas from 9 May

Rules to be Broken