Why we’re not all middle class: a counter to BBC TV series

This article is over 20 years, 10 months old
\"In the modern world the majority of people could be termed middle class.\" This is the conclusion of the new TV series Middle Classes: Their Rise and Sprawl. It charts the \"middle classes' rise to social dominance\" through the 20th century.
Downloading PDF. Please wait...
Saturday 03 March 2001

‘In the modern world the majority of people could be termed middle class.’ This is the conclusion of the new TV series Middle Classes: Their Rise and Sprawl. It charts the ‘middle classes’ rise to social dominance’ through the 20th century.

The programme claims society has been fundamentally transformed because people now have consumer goods such as fridges, washing machines, TVs and videos. This is an argument that many media commentators and academics have accepted over the last two decades-that the working class is shrinking and the middle class now controls society.

It is the justification New Labour uses as it loves up to the rich and embraces pro-market policies-that the world has changed and so must the party. As the TV programme puts it, ‘At the heart of our society are engineers, businessmen, holiday makers and white collar workers, the products of a century of class mobility.’

But if ‘four fifths of the population are middle class’, why are most people in Britain getting less than the average industrial wage? Some 70 percent of workers get less than the figure the government bandies around for average annual earnings – £21,000. This means many cannot afford to get a mortgage in ‘boom time’ areas like the south east.

Many people fear losing their job and toppling over into dire poverty. Workers in Britain work 200 hours more every year than other workers in the European Union. The problem with the argument that ‘we’re all middle class now’ is that it completely misunderstands what class means.

It is not about whether you wear a suit to work, what your accent is, what films or TV programmes you like, or if you go abroad on holiday. Class is about how modern society is divided in two main groups. There is the small minority of people who have enough money to sit back and do nothing if they want to.

These people own and have control over the means of producing all the wealth in society. And there is the mass of people who have to work to make a living, and that work creates profit for the businesses owned by the minority. Which class you are in determines how much control you have over your life-what choices you can make about your life or if it is dominated by work.

‘OUR EPOCH possesses this distinctive feature: it has simplified the class antagonisms, society as a whole is more and more splitting up into two great hostile camps, into two great classes directly facing each other-bourgeoisie and proletariat.’

That is how Karl Marx, in the Communist Manifesto, described the huge changes brought about by the rise of capitalism during the 19th century. His description, written over 150 years ago, fits perfectly today. The ruling class today has far more power than its 19th century ancestors could ever dream of.

The world is dominated by a handful of massive multinational corporations and financial institutions that have developed over the last century. There is a concentration of huge wealth in the hands of the small minority of people who control these companies and institutions. The richest three individuals in the world control as much wealth as the 48 poorest countries combined.

At the same time the development of capitalism has created a situation where the working class has become the majority class. In Marx’s day most people lived off the land and there was no country where workers were a majority of the population. In the last 50 years alone the working class has grown. There was a 28 percent increase in industrial workers in the top 25 countries between 1950 and 1998.

In South Korea alone there are double the amount of workers that existed in the whole world during Marx’s time. The middle class is the group in between the two major classes in society. It includes people like top managers whose salaries are so large they could really be considered part of the upper class.

There are also those individuals who are genuinely in the middle, like shopkeepers or small businessmen. They are not waged workers but they have little control over their situation. There is another group of people commentators describe as middle class-‘white collar workers’ like teachers, nurses, social workers and office workers. Sections of these people did have a privileged status at the beginning of the 20th century.

But over the last century these groups have seen attack after attack upon their pay and conditions. Teachers work long hours for little pay in underfunded schools. Further education lecturers are paid worse than teachers, face short term contracts in colleges, and could lose their jobs at a moment’s notice through funding cuts.

Clerical workers are poorly paid, often non-unionised, and face massive job insecurity. These groups of workers are now part of the working class alongside those who assemble cars or washing machines on a production line.

Official statistics and sociological surveys often imply that about 30 percent of the population are part of the comfortable middle class. But their descriptions don’t give the true picture. For example, the Office for National Statistics puts teachers, nurses, midwives, youth workers, actors, journalists and others in its top category, ‘professional and managerial’.

The nurses and midwives who suffer appalling pay and overwork would laugh at the idea of being included in the top social grouping in society. Most people-around 75 percent of the population-depend on the wage they get from work to survive. They could be a call centre worker, one of 400,000 slogging away in factory-sized workplaces. This work is similar to any job on a production line. This is office work at the beginning of the 21st century. Workers, whether they are in offices, hospitals, schools or factories, have enormous power.

They work alongside one another in similar jobs, are subject to the bosses’ will and share the same concerns. It means workers can come to see that uniting to fight is the only way out of any crisis.

Bosses make their profits by exploiting workers. When workers challenge that exploitation they can bring the whole system to a halt. Workers in Britain have given a glimpse of this power in the strikes by London’s tube workers, Vauxhall car workers, and council workers taking action against cuts.

Marx wrote about capitalism creating its ‘gravedigger’ in the form of the world working class 150 years ago, when the working class was confined to parts of Europe. Today we can see that class and the power to transform society in every part of the world, including Britain.

For more discussion about the class divide in society read A Question of Class by Lindsey German Price £3.50, available from Bookmarks, phone 020 7637 1848, » www.bookmarks.uk.com 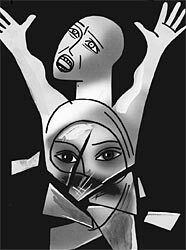 La Ville est Tranquille: Urban tale gets under the skin