At its centre stand the Arab revolutions, with the year ending with new clashes between protesters and the ruling military council in Egypt, a strike wave in Yemen, continuing strikes and sit-ins in Tunisia, deepening protests against the Assad regime in Syria and a rash of strikes in Kuwait, suggesting that even the Gulf states may not be immune to revolt in 2012.

But the ripples of revolt spread far beyond the Middle East. In Chile a mass student protest rocked the government, China has seen a new wave of strikes and protests and we’ve seen the emergence of the Occupy movement in the US, still the most powerful chunk of the system. In Europe the year ended with general strikes in Portugal, Belgium and Italy, and the biggest one-day strike in Britain in living memory. The massive struggles of Greek workers are likely to be a sign of things to come elsewhere in Europe in the coming months and years.

All of this represents a major break with the dominant ideas since the fall of the Berlin Wall in 1989. The collapse of the East European states was hailed as a vindication of free market capitalism, now held to be without a rival. Prosperity and democracy would now seamlessly advance together.

But three decades of neoliberalism have put massive pressure on the social and political structures that have helped bind people to the system. A remarkable report issued last month by the OECD, which represents a host of leading industrial nations, points out that inequality has reached its highest level for over 30 years across its member states.

Entitled “Divided We Stand,” the report urges governments to take action to reduce inequality to stave off social and political instability, including higher taxation of the rich. Such advice is unlikely to be heeded, however. Indeed the global crisis and austerity measures will deepen the pressures on those at the bottom of society. But the report reflects the nervousness among some of the more perceptive members of the ruling class about the potential for further and deeper upheavals that may threaten their wealth and power. As the OECD’s secretary-general Angel Gurria observed, “The social contract is starting to unravel in many countries.”

Two things are certain. Firstly, the economic crisis is far from over, and secondly, there will be more political explosions in 2012.

For socialists this means we face our biggest challenges since the 1970s. One major difference is that this time round Stalinism, which was able to marginalise the genuine revolutionary socialist tradition for 60 years, is a shadow of its former self. Of course, this has left enormous ideological confusion over the nature of socialism and real Marxist tradition. But the potential for socialists to relate to major struggles and find new audiences for its ideas is massive.

Above all it is in the battles of workers in Mahalla’s textile mills, on the Suez Canal, in Egypt’s schools and elsewhere and the courageous defiance of Cairo’s working class youth against the military that can we see a glimpse of an alternative to capitalism’s horrors beginning to take shape. 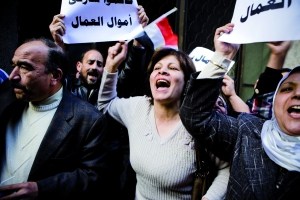