All Along the Watchtower

This article is over 18 years, 7 months old
Review of "The Prophet Armed", "The Prophet Unarmed" and "The Prophet Outcast", Isaac Deutscher, Verso £15 each
By Ian Birchall
Downloading PDF. Please wait...
Thursday 08 January 2004

In my first term as a student I attended a Labour Club meeting about the 1958 South Bank building workers’ strike. The right wing argued that we shouldn’t support the strike as it was led by ‘Trotskyists’ (sound familiar?). I was bewildered, and next day went to the library and took out the first volume of Deutscher’s Trotsky biography. I shall always be grateful to Deutscher for introducing me to one of the great revolutionaries of the 20th century.

After Trotsky’s death in 1940 his followers were confined to small meetings and obscure newspapers. Deutscher, a gifted journalist and a fine writer, could not be ignored. Coinciding with a wave of radicalisation around CND, Deutscher brought Trotsky back into the mainstream and introduced him to a new generation.

History is not made by great men, but history sometimes makes great men – Trotsky was one of them. Reading Deutscher’s biography I realise just how outrageous it is that Trotsky’s thought was transformed into something called ‘orthodox Trotskyism’. There was nothing orthodox about Trotsky. He was a bold and original thinker.

Deutscher introduces us to the 17 year old revolutionary who declared, ‘A curse upon all Marxists, and upon these who want to bring dryness and hardness into all the relations of life!’ (a reminder never to write anyone off too quickly). Trotsky soon learnt that there was more to Marxism than that, but he always used it creatively to analyse new problems. In 1906 he developed the theory of ‘permanent revolution’, arguing that Russia, though economically way behind western Europe, could move straight to socialist revolution. Lenin vehemently rejected this, until in April 1917 he was faced with the irrefutable evidence of workers’ councils springing up in Russia, and went over to Trotsky’s view.

In the early 1930s Trotsky faced the rise of Hitler and the suicidal refusal of Communists and Socialists to unite. His writings on how to fight fascism are remarkable precisely because they do not refer to formulae inherited from half a century earlier, but confront the concrete realities of his own day.

Deutscher’s three fat volumes give us not just an individual life but 40 years of the socialist movement – 1905, the First World War, the Russian Revolution, Stalin, Hitler, the Spanish Civil War, the looming Second World War. Anyone who thinks that ‘soviet’ is just another word for Russian should read Deutscher’s wonderful account of the Petersburg soviet of 1905, and see just what is meant by an organisation of workers’ power.

The republication of Deutscher’s biography is very welcome. Hopefully the bleating of various Blairite journalists about alleged ‘Trotskyist’ influence in the anti-war movement will send a new generation to the bookshop in search of an explanation.

However, enthusiasm cannot be unqualified. Deutscher started out as a revolutionary, a Trotskyist who wrote a document for the founding conference of the Fourth International. He then withdrew from active politics, arguing that in the difficult period after the Second World War revolutionaries should withdraw to the ‘watchtower’. Not only did he believe that Trotsky’s defeat was inevitable, he thought that despite Stalin’s brutality the Stalinist economic set-up could spread revolution to other parts of the world.

In the final volume he gives a moving picture of Trotsky, persecuted by Stalinists and right wing governments alike, until he finally finds asylum in Mexico. Trotsky’s courage, the terrible fate of his children and his own eventual murder are vividly presented. But Deutscher does not take seriously the task which drove Trotsky on in those terrible years of midnight in the century.

Trotsky was fighting not just for socialist ideas but for socialist organisation. For that he immersed himself in the terrible world of small-group polemics, sectarianism and constant splits, a world with which Deutscher lost patience.

So if you haven’t read Deutscher find time for these three volumes. But also read at least the final volume of Tony Cliff’s biography of Trotsky, The Darker the Night, the Brighter the Star. Cliff, while respecting Deutscher as a historian, loathed his retreat to the watchtower, seeing little difference between a watchtower and an ivory tower. Cliff, who devoted himself till the day he died to the job of building an organisation, could empathise with Trotsky in a way that was utterly alien to Deutscher. 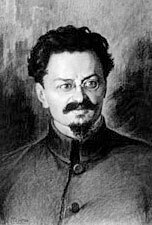