Antisemitism and the left in Britain today (3)

We have President Trump appointing open antisemites to the White House, the end of the so called “solution” of two separate states for Jews and for Palestinians, the expansion of “illegal” settlement in the occupied West Bank — and John Rose argues for the “the need to campaign for a national dialogue between Palestinians and Israeli Jews”.

Is this really the key task for socialists and students on British campuses today? Few Israeli students study here, and those that do have served three years in the Israeli army where they are taught to hate and kill Palestinians.

In South Africa under apartheid some individual whites did play a heroic and important role in the fight against the racist state. But it was mass resistance from black workers and the youth, the township uprisings, mass strikes, as well as international solidarity that forced the regime to negotiate the settlement with the ANC that ended the apartheid state.

In the Middle East today we will need to build mass opposition to the “apartheid state” of Israel. Revolutionary movements in the Arab world, and international solidarity, will force their leaders to negotiate with the Palestinians.

It is mass support for the Palestinians that could lead to a dialogue between Palestinians and Israeli Jews about dismantling the Zionist state, as John proposes. This is desirable, but it is not a practical project for us here in Britain.

Building the BDS movement is the central strategic task for students and campaigners for justice for the Palestinians. We know that the Israeli state understands this; it funds and employs “diplomats” to spy on and undermine the BDS campaign, and conspires to bring down those who support the Palestinian struggle for justice.

In the US today Zionists and Jewish organisations are in crisis. They are split over how to respond to the anti-Semitism of Trump’s chief strategist, the white supremacist Stephen Bannon. Organisations such as If Not Now, Jewish Voice for Peace and Jews for Racial and Economic Justice have all mobilised against Bannon. Their actions build upon the long-term decline in support among Jews in America for Israel.

The leaders of the The Anti Defamation League, a mainstream group that combats antisemitism in America, has pledged it will register as Muslims should President Trump create a national database for the religion’s followers.

In contrast, unconditional supporters of Israel such as Alan Dershowitz have welcomed Trump. Israeli commentator Yaron London has said: “It would be good to have some antisemitism in America. Not serious antisemitism, not pogroms, not persecutions that will empty America from its Jews, as we need them there, but just a taste of this pungent stuff, so that we can restore our faith in Zionism.”

You should be a part of this

The failures of the war on drugs 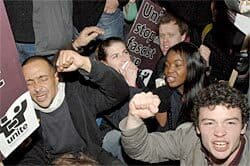