This article is over 7 years, 5 months old
Assia Djebar, one of Algeria's most gifted writers, died on 6 February. Sheila McGregor celebrates her life and her part in the struggle for independence.
By Sheila McGregor
Downloading PDF. Please wait...
Tuesday 03 March 2015

Born as Fatima-Zohra Imalayène in Cherchell in 1936, Assia Djebar took her pen name to save her parents from embarrassment when she wrote her first novel, La Soif (Thirst).

Initially written off as the Françoise Sagan of Algeria — ie a lightweight — Assia Djebar went on to become a historian, poet, film maker and writer and the first person from the Mahgreb to be elected to the Académie Française, the body which oversees developments in the French language. Her work has been translated into at least 20 languages, although not yet into Arabic. She has been celebrated and honoured as a writer and intellectual in many parts of the world and is an inspiration for many women Algerian writers today.

Djebar’s life was profoundly shaped by the fate of her native Algeria and her feminism. Educated from secondary level onwards in French while Algeria was still a French colony, she was the first Algerian woman and first Muslim to go to Sèvres, one of France’s top universities. She followed the call for strike action issued by the Union of Algerian Students in support of the struggle for independence and was excluded from the university for her pains. Unable to return to Algeria, she and her husband went to Tunis to join other Algerians in exile who supported the struggle for independence.

Here she met Frantz Fanon and his wife Josie with whom she became firm friends. Her novel, Les Alouettes Naïves (The naive larks) was based on her experience of the liberation movement in Tunis and reflects the aspirations for change of Djebar’s generation in post-colonial Algeria, including, in Djebar’s case, hopes for a changed role for women in society.

In the decade following independence Djebar researched the role of the peasant women of her mother’s tribe in the struggle for independence, about which little is recorded, and which she then used for one of her films. As well as turning to cinema, theatre (her first husband wrote plays) and poetry, Djebar spent a decade attempting to develop her ability to write in Arabic, which had become Algeria’s national language. Although she herself spoke Berber, Arabic and French, her French education led her back to writing in what many regarded as the language of the coloniser.

Djebar’s finest novel, in my view, is L’amour, La Fantasia (Fantasia: An Algerian Cavalcade), one of the best, if highly complex, novels about colonisation and the struggle for liberation. Djebar documents the violent wars with a mixture of original sources from French officers and travelogues of painters like Fromentin, as well as her own superb descriptions showing her ability to paint with words. Threading through this is the narrative of a young girl, brought up in colonial Algeria, living in two worlds with different languages and ways of life, oppressed through being a colonial subject but offered an “escape” through the coloniser’s education.

Djebar felt increasingly trapped and isolated as a woman intellectual in post-colonial Algeria. She moved to work in Paris and from there to an appointment as professor at the University of Louisiana and then the University of New York. She always identified herself as an Algerian woman and a Muslim. Throughout, she wrote about Algeria and often about the difficulties in women’s lives, including a book of short stories named after Delacroix’s and Picasso’s paintings Les Femmes d’Alger (Women of Algiers). She also explored the role of women in Islam in several of her novels, in particular in Loin de Médine (Far from Medina) in which she looks, in particular, at the role of the Prophet Mohammed’s youngest wife.

Djebar opposed the annulling of the legislative elections in 1991 and the coup d’état by the army which led to the decade known as the “bloody nineties” during which a whole array of Algerian intellectuals and writers perished or escaped into exile. In homage, she wrote Le Blanc De L’algérie (Algerian White) in which she recreates the last day of some of those friends who were assassinated.

The violence and destruction of those years took their toll. In her last novel, Nulle Part dans la Maison de mon Père (No place in my father’s house), she returns to the story of a teenage girl she wrote about in her second novel Les Impatients (The impatient ones) whose attempt at suicide was thwarted by a quick acting tram driver. This time she ends the novel with the wish that the suicide attempt had been successful. For Djebar, there was still no equal role for women either in their homes or in wider Algerian society. 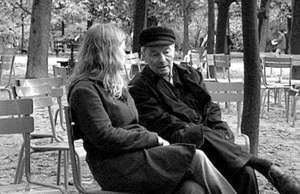