Battles ahead in Spanish state

The Spanish general election on 10 November saw the possibility of a left wing coalition government but also the horrifying growth of the far-right party VOX to become the third force in parliament.

This is the fourth general election since December 2015, underpinning four years of political turmoil and instability.

Spain has been a stark example of the social polarisation and erosion of the neoliberal centre that followed the 2008 economic crisis, with the Labour-type PSOE and conservative PP becoming shadows of their former selves.

The election was triggered by the failure of PSOE and the anti-austerity party Unidas Podemos to reach an agreement after the previous election in April.

Many rightly perceived their months-long negotiations to be more about ministerial positions than about how to best address ordinary people’s problems.

PSOE’s leader Pedro Sánchez hoped that a new election would see his party regain ground lost to Podemos in recent years. In the event, both parties saw their vote share drop as abstention rose in protest. This time, it took Sánchez and his counterpart in Podemos Pablo Iglesias less than 48 hours to sit down and announce a deal.

This centred on the defence of public services and pensions, action on climate change and women’s rights, and will no doubt be welcomed by many activists and workers — even if it’s a far cry from the expectations raised by Podemos when it was formed amid mass movements against austerity in 2014.

However, the formation of the new government is far from inevitable. When the vote takes place in parliament, PSOE and Podemos will depend on the abstention of the centre-left Catalan pro-independence party ERC.

The price for its abstention could be a new referendum on Catalan independence or the release of the political prisoners imprisoned over their role in organising the last one.

PSOE is adamant that a referendum is incompatible with the Spanish constitution and has refused to grant a pardon to the prisoners. While opposing police repression, Podemos failed to back the 2017 referendum on the grounds that it was illegal.

There have been brilliant demonstrations, strikes and occupations recently in Catalonia in response to the political sentences. These could be further emboldened if the Spanish judiciary presses ahead with an attempt to prosecute Catalan president Quim Torra and bar him from office over the display in official buildings of symbols of solidarity with the political prisoners during the election campaign.

But VOX bagged 15 percent of the vote and has grown to 52 seats from 24 in the April election, in which it entered parliament — the first time a far-right party had done so since the fall of Francoism in the late 70s.

VOX’s sharp growth is inseparable from the state repression that cracked down on the Catalan movement from late 2017 onwards. Most mainstream political parties pandered to Spanish nationalism and to different degrees justified police brutality.

But it’s also part of the same global trend of far-right growth that has seen Trump and Bolsonaro come into office. VOX rides the wave of Spanish nationalism, but on the back of this it pushes the same vicious Islamophobia, anti-migrant racism and sexism as its counterparts elsewhere.

Thus, its programme carried the suspension of Catalonia’s home rule and a ban on all pro-independence organisations.

But it also included pledges to deport all illegal migrants and those with criminal records, including ones with legal status; to build an “insurmountable wall” along the border with Morocco; and to remove abortion and gender reassignment surgery from the services available in the public health service as part of a wider offensive against “gender ideology”.

On UN Anti-Racism Day this year 5,000 marched in Barcelona under the slogan “Stop VOX” — the biggest demonstration to date in the Spanish state on that day. A much bigger anti-racist movement will be needed to push back against VOX’s poison, however.

But the attacks the new government will face will not come just from the far-right. The Spanish stock market plummeted when the government deal was announced, and the mainstream media’s reaction has been unanimously hostile.

And the European Union is already demanding the new government’s budget must include more than €9 million in cuts, including to pensions.

This is a government whose progressive aims ordinary people will have to defend from the right and fight to further on the streets and in workplaces.

Even people in Catalonia cannot afford to be neutral — if this government fell, the almost certain alternative would be a right wing alliance between PP and VOX.

Without such mobilisation from below, the PSOE’s past record as austerity enforcer or the experience of Syriza in Greece, which Podemos still upholds as a model, suggest the government will not withstand the pressures from the right and the bosses.

There has to be an independent mass movement that makes them accountable. Being different to the right means respecting the Catalans’ right to decide over their future, not giving cops and judges a free rein. It also means a commitment that, if a new recession starts, this time those whose system has caused it, not ordinary people, should pay for it. 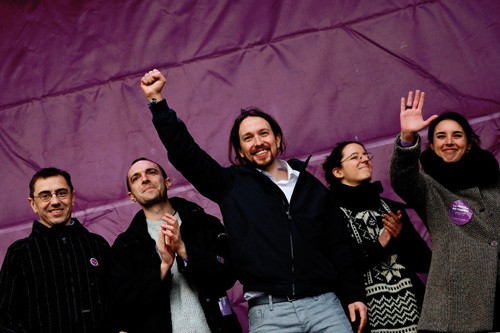