Walden Bello, squeezing his way onto a carefully-vetted Make Poverty History platform in Edinburgh this summer, spoke of the intimate connection between the devastating poverty we see globally, and the devastating wars currently being fought. MPH stewards could be seen offstage frantically mugging for others to remove the Filipino economist from his dais.

Like his appearance in the rallies before the G8 gathering, Bello’s latest book, Dilemmas of Domination, places the twin defining features of latter-day capitalism in stark relationship to each other. Wars and poverty are the unholy offspring of a world dominated, in his view, by the runaway forces of financial capital. His chapters on how this affects the situation in the global South are particularly strong. The parallels with earlier, explicitly Marxist critiques are clear. Lenin, Bukharin and others detailed the intimacy of this relationship in the first half of the last century. They aimed to challenge a widespread notion that the increasing ‘globalisation’ of capitalism, and the growing interdependence of financial links between countries, would calm its drive to war. Against this happy picture, Lenin’s Imperialism and Bukharin’s Imperialism and World Economy aimed to demonstrate that militarisation and territorial aggression were the necessary counterparts of capitalist crisis – and that far from weakening the tendency to crisis, finance capital made crises both more likely and more severe.

The insistence on that link is very much needed today, when Make Poverty History can exclude the Stop the War Coalition from affiliation. It’s a link that many hundreds of thousands have already drawn, when they marched demanding ‘food not bombs’, or saw the havoc of Hurricane Katrina against the billions spent invading Iraq. Bello has performed a valuable service in putting flesh on the bones of that instinctive argument, showing how colossal military spending and flows of financial wealth are symptoms of the US’s continuing relative decline. Unable to dig itself out of the economic hole it collapsed into in the 1970s, regardless of how much its workers’ wages are squeezed, the US ruling class has turned to guns and loans to boost its ailing fortunes.

This runs counter to common sense for many in the anti-war movement. The assumption often made is that the US is aggressive because it is powerful. But many of those outside the movement’s ranks think similarly. Stephen M Walt, a Harvard academic and a man geographically and politically thousands of miles from Bello, has written a shortish book on that theme. Taming American Power makes its premise clear from its title: the US is now too powerful to flex its muscles without inviting a response – something like that which another US academic, Chalmers Johnson, famously labelled ‘blowback’. Walt describes in some detail the responses not just individuals but entire states might make in a ‘unipolar’ world. Britain is there: Tony Blair’s brown-nosing is given the marginally more dignified name of ‘bonding’. The North Korean dictatorship is used as an example of ‘blackmail’, threatening US interests from a position of otherwise near-total weakness. And Walt backs up his thesis with some mind-boggling statistics: that, for example, the US Department of Defence ‘now spends over $50 billion annually’ on research, ‘an amount larger than the entire defence budget of Germany, Great Britain, France, Russia, Japan or China’. Walt’s central contention is that this power should be used responsibly. His book offers a glimpse into the liberal mindset, post-Iraq. It is a good brief guide to a number of different political situations in the world today, and it is impeccably referenced. It does not, however, convincingly explain how badly awry that war has gone, or why it was fought.

Current US assertiveness cannot be seen simply as resulting from the short-sighted view of a few neoconservatives giddy at the thought of all those bombs. In 1945 the US produced half of the world’s economic wealth. After single-handedly defeating one and materially assisting the defeat of another major power, billions of dollars were found to reconstruct both Japan and Western Europe. Billions more were found to compete, over the subsequent decades, in an arms race with a new enemy, the USSR, while US working class living standards grew as never before, and the dollar itself was established as the solid monetary foundation of the entire ‘free world’.

The situation now stands in marked contrast. The US produces around one fifth of the world’s annual economic wealth. It depends on incredible imports of capital from East Asia to maintain its economic growth, yet workers’ real hourly wages have barely risen since 1975, and social spending is under constant threat. Militarily, it enjoys an absolute advantage over every other state – on paper. In practice, as the bloody debacle of Iraq best illustrates, the US ruling class is unable to utilise it for political goals. Behind the neoconservatives’ bluster is the (correct) apprehension that the apparent window of military opportunity opened by the collapse of the USSR may very soon close. A ‘peer competitor’, most likely China, may soon emerge to challenge the US on a more even basis. It is this fear, and this sense of weakness, that propels the drive to war.

Bello brings the fear elements out very well. The most serious fault of his book is the absence of motive force for the persistent trauma the US finds itself in. He relies too much on the apparently spontaneous appearance of financial capital, without delving deeper to find the roots of the current crisis that drove its formation. To do so would require a theory of capitalist crisis centred on the capitalist process of production itself, centred on the issue of what Marx called the declining rate of profit. Without that deep theory of crisis, Bello’s analysis is doughnut shaped – it has a hole in the middle. Nonetheless, his book is a valuable contribution to the debate over the future course of imperialism. 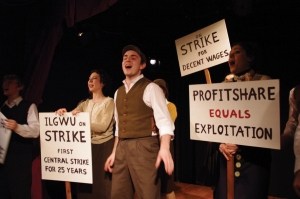 The Shepherd—a cruel tale of greed, developers, land and sheep