The Black Panther Party for Self Defense represents the high point of the struggle for black liberation in the US. The story of the party’s founding by Bobby Seale and Huey Newton in Oakland California in 1966, and its subsequent rise and fall, is rich with lessons for the struggle today. This is especially true in light of the growth of the Black Lives Matter movement against police brutality and racism.

This insightful documentary film was seven years in the making. It includes never before seen archival footage of critical moments in the Panthers’ development and features interviews with leading members such as Kathleen Cleaver, Emory Douglas and Ericka Huggins.

It shows how the Panthers stormed into the consciousness of black people and to the attention of the authorities when party members appeared at the California state capitol bearing arms — as was their right — in their uniforms of black berets, black leather jackets and sunglasses.

Party branches sprang up all over the country, while the circulation of its newspaper the Black Panther mushroomed. The “turn the other cheek” strategy pushed by the leadership of the civil rights movement had outlived its usefulness.

The Panthers were instead inspired by the ideas of Malcolm X — killed a year before the birth of the Panthers — who preached black self-defence and black liberation “by any means necessary”.

The film shows how the Panthers’ ten-point programme spoke to a northern black audience in a way the civil rights leaders had not — decent housing for all, an end to police brutality, community control and so on.

But with success came problems and the film does not shy away from bringing these out. Refreshingly, the film does not subscribe to the nonsense peddled by some that it was the CIA/FBI flooding the ghettoes with crack cocaine that brought the party low. Instead it locates its eventual demise in its political choices.

The confrontational tactic of patrolling “the pigs” on the one hand, and the survival programmes — part of its ethos of “serving the people” — on the other, pulled the party in different directions.

Was the party a social service, a revolutionary organisation or both? Eldridge Cleaver sneered at the breakfasts for children programme and counterposed it to the need for urban guerrilla struggle. Seale, in reaction to Cleaver’s adventurism, was to eventually take the party down the road of electoralism. But the state, of course, was never going to allow the Panthers the space to resolve these political differences.

Award-winning director Stanley Nelson’s film captures the development of these problems and the repression of the organisation by the authorities. The counter-intelligence programme of J Edgar Hoover’s FBI aimed to destroy “black nationalist hate groups” and prevent the rise of a “black messiah”.

It set out to infiltrate, disrupt and destroy the party. Indeed, every branch was infiltrated by informants — and often it was these individuals, one of whom we hear from in the film, that supplied weapons and instigated fire fights with the cops.

Nevertheless, the success of the FBI was not inevitable. The Free Huey campaign, for example, went nationwide and had tens of thousands of supporters. In the film we see Marlon Brando speaking out for Newton, and Jane Fonda hosting a fundraising event at her townhouse to raise funds for the legal defence of 21 Panthers imprisoned in New York.

We see the Panthers making common cause with poor whites and Latinos. We see Chicago Panther leader Fred Hampton — killed by a police death squad in 1969 — famously ask audiences to repeat after him “I am a revolutionary”. Finally, we see how the state is able to isolate the party following the election of Richard Nixon.

The Panthers, as the title of the film makes clear, were at the head of a wider radical movement — the anti Vietnam War movement, the Women’s Liberation Movement (the majority of the Panthers’ rank and file members were women) and the student movement were coalescing into the most serious challenge to US capitalism since the 1930s.

Their revolutionary struggle remains an inspiration today, providing a fine antidote to “white privilege” theory that, unlike the Panthers, fails to understand how the class divide means the fight for liberation is part of the fight against the capitalist system that invented racism in the first place. In this fight black workers will be in the vanguard of the revolution, as they were in the fire last time. 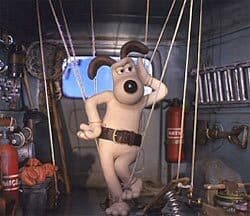 Curse of the Were Rabbit: not just a cheesy animation

A Certain Image of Humanity