This article is over 4 years, 4 months old
The right is on the attack against President Maduro of Venezuela, the successor to Hugo Chavez and his project of socialism in the 21st century. While attempts to topple him must be opposed, it is the contradictions of Chavismo that have laid the basis for the current crisis, writes Joseph Choonara.
By Joseph Choonara
Downloading PDF. Please wait...
Monday 04 September 2017

What can be learnt from Venezuela, currently witnessing a deadly struggle to topple its president, Nicolás Maduro? Over 100 have been killed, and the upheaval has added to the hardship in a country that has seen its economy shrink by one third since 2013.

The media and the political establishment in Britain have derived a simple lesson: misery is the only possible outcome if you elect a government promising, as Maduro’s predecessor Hugo Chavez did, “socialism in the 21st century”. In other words, this is what will happen if you elect Jeremy Corbyn as prime minister.

Yet the crisis in Venezuela is not a result of too much socialism but, on the contrary, too little.

The left internationally should, of course, condemn the attempts to topple Maduro. Victory for the right would destroy whatever remains of the attempt by Chavez, president from 1999 through to his death in 2013, to break with the neoliberal consensus in Latin America and introduce ambitious poverty reduction schemes.

It would mean persecution of all those who have identified with what became known as the “Bolivarian Revolution” within the country and demoralisation for those beyond its borders. It would boost the noxious Donald Trump, who has threatened US intervention against what he dubs the “Maduro dictatorship”.

However, it is also legitimate to ask why, after almost two decades of rule by Chavez and his successor, the old elite remain in such a powerful position in Venezuelan society. And why, after all the popular measures taken since the 1990s, the opposition could, in 2015, win a majority in the national assembly.

Understanding that means recognising both the radicalism and the contradictions of Chavez’s Bolivarian Revolution.

Chavez came to prominence while a colonel in the Venezuelan armed forces. He led a group of military officers who despaired of the corruption of the existing political establishment. In 1992 he led an attempted left wing coup.

When the coup failed, Chavez volunteered to appear on television to try to avert further bloodshed. The minute-long broadcast is remembered for two things. First, Chavez took full responsibility for the failed uprising, something unheard of in Venezuelan political life. Second, he argued that the objectives of the uprising had not been achieved — “for the moment”. This phrase would echo round the country in the years to come.

After a brief spell in prison, Chavez stood in the presidential elections, winning 56 percent in December 1998. It was a rejection of the old political elite, though it was not yet clear what the new period opening up in Venezuelan society would offer.

The radicalism of Chavez was driven largely by his relationship with a mass movement that surged forward in the early 2000s. As Chavez sought to open up the books of the giant, ostensibly publicly-owned, oil company PDVSA, in reality a corrupt “state within a state”, the Venezuelan elite in April 2002 made their first attempt to topple the president.

The presidential palace was seized by sections of the army and Chavez taken away to a military base. The response of ordinary people was decisive. Hundreds of thousands took to the streets, breaking the confidence of the plotters and forcing them to abandon their coup.

Later the same year Venezuela’s capitalists attempted a three month long shutdown of industry to try to bring down the government. Now there was a prolonged battle in which the working class sought to restart the oil industry, to keep transport networks going and to distribute food to those who needed it. A radical union federation, the UNT, was born out of this successful struggle.

In 2004 the elite once more tried to remove Chavez, this time through a “recall referendum”. Again there was a colossal mobilisation of popular forces to defeat the right in the vote that followed.

It was in this phase of the Bolivarian Revolution that the groundwork was laid for the most ambitious social programmes — in which oil wealth would be channelled into health, education or housing. And it was in this period that the movement began to create, at the base of society, elements of popular control — “Bolivarian circles”, cooperatives, communal councils and urban land committees sprang up.

However, there were three contradictions in this process.

First, it was a transformation within the framework of capitalism. Much of the money came from selling oil — priced at well over $100 a barrel as George Bush destabilised the Middle East and the Chinese boom raised demand. Social spending doubled, but this could be done without seriously threatening the power of the capitalist elite. Private wealth also grew in the Chavez period.

Second, a move towards a socialist society ultimately requires a decisive confrontation with the capitalist state. The old state machine was certainly disrupted by Chavez’s rise to power, but it was reorganised under Chavez, not dismantled. New generals were appointed in the place of the coup-plotters but, as their influence grew, their interests were increasingly detached from those of the mass movement. Today half the cabinet are from the military — with Vladimir Padrino, head of the armed forces, seen as a key figure in the government.

Worse still, there was the emergence of a “Bolivarian bourgeoisie”, people who jumped on the Chavez bandwagon, integrating themselves into the state to share in the spoils of the oil bonanza. Corruption continued under Chavez and has grown under Maduro. The conspicuous wealth of some of those linked to the regime has been a source of discontent among the masses.

The third contradiction involved the political force leading the Bolivarian Revolution. In 2006 Chavez announced the formation of the PSUV, a new political party, and proposed that everyone who supported his project should join — and about five million did!

But there was always an ambiguity. Was this an organisation to give political expression to the most radical elements of the mass movement? Or was it an instrument for channelling the imperatives of the state down into the popular movement.

It is now clear that it is primarily the latter — a party tightly controlled from above.

These contradictions helped lay the basis for the crisis under Maduro.

The death of Chavez was without doubt a blow to the Bolivarian process — his personal prestige and rapport with the poor and dispossessed were unquestionable. Yet there is more to the degeneration than the transition to Chavez’s successor.

The decline of oil prices is one factor. However, it is increasingly clear that much of the prior oil income has been squandered or pocketed by the rich. Rather than new, sustainable industries being created, oil dependence has grown — to the extent that 95 percent of external revenue now comes from oil. Further development of the Bolivarian Revolution under these circumstances would require a much more decisive struggle from below to dispossess the wealthy and powerful — whether they are from the traditional elite or the new one linked to the state.

Then there is the exhaustion and demoralisation of the mass movement that rose to such heights in 2002-5. The victory of the right wing in the 2015 assembly elections reflects this — 2 million fewer Chavistas came out to vote for Maduro’s candidates.

In the wake of those elections, Maduro’s response was to turn to repression, suspending regional elections, as well as trade union elections, and declaring a state of emergency.

As the right wing took to the streets Maduro organised elections for a Constituent Assembly, which were boycotted by the right. Superficially this replicates a body with the same name convened by Chavez in 1999 to rewrite the constitution. But in reality it is a parody of that highly democratic institution. The current Assembly, tightly controlled by the PSUV, is designed to allow Maduro to rule in the face of a hostile parliament.

The repression hits the left as well as the right. Marea Socialista, a revolutionary socialist party, which broke with the PSUV in 2015, has seen its offices raided by police. The closing down of democratic space is a reversal of what happened during the radical phase of the Bolivarian Revolution.

Furthermore, as Mike Gonzalez argues in a recent issue of Jacobin, Maduro’s solution to the economic crisis engulfing his government is to open up the Amazonian Arco Minera region to oil, gas and mineral extraction in partnership with the multinationals — a plan previous rejected as ecologically destructive and against the interests of indigenous peoples.

The response of the international left to this dire situation must be two-fold.

First, we must condemn attempts by Theresa May in Britain or Donald Trump in the US to support the forces who wish to destroy what remains of the Bolivarian Revolution.

Second, we must try to explain what went wrong and how it could be different.

Socialism cannot be equated with the election of a left wing president or a left wing government. Such a development can play an important role in galvanising and giving confidence to the working class — as it once did in Venezuela and as it might do again if, as we hope, Corbyn wins a general election in Britain.

But a genuine transition to socialism requires that power passes from the hands of the capitalist minority into the hands of democratic bodies of workers who can start to reorganise society from below. The embryonic elements of popular control, seen in the radical phase of Venezuela’s struggle, show that this is possible. These elements must be nurtured until they form an alternative, democratic centre of power, challenging the existing state.

Furthermore, a decisive confrontation is required with the existing state in order to complete a socialist revolution. To win in those circumstances, workers must possess their own organisation, capable of drawing together and giving overall direction to the disparate struggles at the base of society.

That requires a revolutionary organisation not linked to the state but independent of it, committed not to running capitalism but to its overthrow.

These conditions apply not simply in Venezuela but in any country in which we aspire to build a genuine socialism of the 21st century. 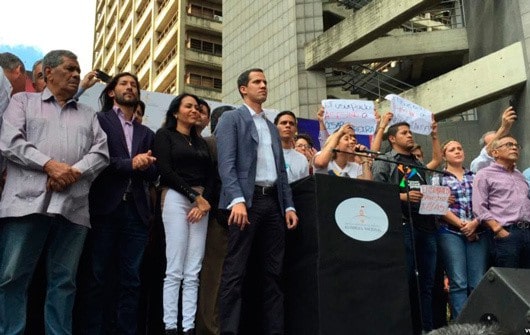 Resist the imperialist coup in Venezuela