The Bolsheviks, Islam and the women of the east

This article is over 4 years, 4 months old
Many believe that religion and socialism cannot coexist — that in order to be a socialist you have to be an atheist — yet, as Naima Omar shows, the magnificent example of the Bolsheviks’ relationship with Russia’s Muslim population following the 1917 revolutions is rooted in a different tradition.
By Naima Omar
Downloading PDF. Please wait...
Monday 26 February 2018

Growing up I always held socialist views, but believed you could not be a socialist and a Muslim, nor could you advocate women’s liberation and wear the hijab. This belief is common among Muslims, based on the assumption that in order to be a socialist you must be an atheist, as all socialists hate religion.

This assumption could be backed up by looking at much of the left today across Europe and beyond. Many are struggling to deal with the questions around religion, in particular Islam. Some have sided with the right in supporting the banning of the hijab and veil in the name of women’s liberation.

But there is another tradition on the left, with its roots in Karl Marx’s writings on religion, which learns from the Bolsheviks’ approach to the Muslims of the Russian Empire during the 1917 revolution.

Marx understood the contradictory nature of religion. As he wrote in “A Contribution to the Critique of Hegel’s Philosophy of Right”: “Religious suffering is, at one and the same time, the expression of real suffering and a protest against real suffering. Religion is the sigh of the oppressed creature, the heart of a heartless world, and the soul of soulless conditions. It is the opium of the people.”

Resistance could emerge and be expressed through religion, even though religion itself materialised from oppression and alienation. The Bolsheviks in 1917 also understood this. Although the Bolshevik Party was non-religious, atheism was never a condition of party membership — religion was treated as a private matter.

Bolshevik leader Lenin was particularly clear on religion. He referred to those on the left who — like militant atheists today — set out to offend people with religious beliefs as “infant-school materialists”. He encouraged recruitment of people of faith, calling them “raw revolutionary recruits who come knocking on our door” who were crucial for the growth of the party and the revolution.

At the time of the revolution the Russian Empire was home to 16 million Muslims — some 10 percent of the population. The Muslim peoples of the eastern parts of the empire had been radicalised by the crisis of the Tsar’s regime, at whose hands they had suffered years of horrendous oppression. At the heart of their demands were religious freedom and national rights.

The granting of such rights was a priority for Lenin and the Bolsheviks as soon as the October Revolution took place in 1917.

Friday, the holiest day of the week for Muslims, was officially declared a day of rest throughout Central Asia; sacred Islamic monuments, books and objects that had been stolen by the Tsars were returned to mosques; in 1921 a parallel Islamic court was established in accordance with sharia law, providing people with the choice between religious and revolutionary justice. Sentences such as stoning and cutting off hands were forbidden.

By 1922 a parallel Islamic education system had been introduced, with the rights to certain Islamic properties being granted back for the use of education. From this, hundreds of madrassahs (Islamic schools) were founded.

These rights were not simply granted from above; they were fought for and won by Muslims alongside other Bolsheviks as part of the revolution.

The efforts made by the Bolsheviks meant that the majority of Muslim leaders were won over to support the new Soviet regime, and the Muslim population was determined to fight and die for it in the civil war. By early 1919 nearly 250,000 Muslims were serving in the Red Army under Muslim officers, with tens of thousands as part of the “sharia squadrons”. The Red Army ensured that indigenous people of former Tsarist colonies ruled themselves in the new autonomous republics.

In September 1920 an important gathering took place in Baku, Azerbaijan: the First Congress of the Peoples of the East. A young Muslim Azerbaijani who served as guard during the congress later recalled that he would place his gun aside for the call to prayer and then return “to defend the conference and the revolution”.

The congress was a turning point in the struggle against colonial rule in Asia — not just against the old Tsarist regime but against British imperialism. Delegates from as far east as Japan attended, including delegates who faced the threat of death on their journey; several delegates were murdered on their way. The British government did everything in its power to block delegates’ journey to Baku, with attacks on the steamship, and patrols in the Turkish Black Sea. This affirmed the threat the congress represented to Western imperialism, especially to Britain.

At the core of the congress was the call for a “holy war” against Western imperialism. This meant “the liberation of all humanity from the yoke of capitalist and imperialist slavery, for the ending of all forms of oppression of one people to another and of all forms of exploitation of man by man”.

However, the toll taken by the civil war to defend the revolution was severe. By 1922 the new soviet regime was struggling to meet people’s most basic needs. This inevitably meant the soviets struggled to continue their efforts to ensure religious freedom and national rights to the Muslim population in practical terms. The subsidy to Central Asia had to be cut, with the closure of state schools, meaning that madrassas had to be financed by the local community. Two years later, in 1924, Sharia courts had all their central funding removed.

But these cuts were the result of necessity, rather than any change in policy. In contrast, the growth of Stalinism from the mid-1920s onwards meant an all-out war against religion, and particularly Islam. Lenin and Trotsky had understood that religious freedom was a means to make amends for the crimes of the Tsarism while also unearthing the class divisions in the Muslim community; it was a necessary precondition of working class unity. Stalin, on the other hand, made no class distinction between the oppressor and the oppressed of the same faith.

Muslim women during and after the Russian Revolution had made great strides in terms of both women’s liberation and religious freedom. The first All-Russia Muslim Women’s Congress in Kazan on 23 April 1917 had 59 women delegates who had been elected by their local organisations, and an audience of 300 women. It passed resolutions demanding equal political rights for women and men, the right to divorce and abolition of child marriage, among other demands.

The ten resolutions passed at the Muslim Women’s Congress were discussed at the May 1917 All-Russia Muslim Congress, which held debates on women’s rights for a whole day. The centre of the debates was the question of polygyny (men having more than one wife). Some delegates had taken a reforming position while the Muslim Women’s Congress had taken the historic decision of calling for it to be banned.

The discussions at the All-Russia Muslim congress emphasised the effect the Russian Revolution had had on women — during the discussion on polygyny, delegate Ismail Imanov concluded that the women should be given the rights they want because they would seize them anyway. Muslims now had a louder voice than they had under the Tsars.

Interestingly, with this new voice, the question of the hijab or veil was hardly brought up. The First Congress of the Peoples of the East was the first in the world to free women from the restrictions typical of Islamic societies of that time. But women delegates to the conference said, “the question of chador [a type of long headscarf], it can be said, comes in last priority.”

After the October Revolution the Zhenotdel (Bolshevik women’s rights organisation) led by Inessa Armand and later by Alexandra Kollontai, organised volunteers, often in veils, to travel to Muslim populations in the east to work with veiled women. They ran education programmes and talked to women about their concerns. Some of them paid with their lives to combat sexism in isolated Islamic communities.

Stalin’s attack on Islam disguised itself under the banner of women’s liberation. This was in direct opposition to the work done by Bolsheviks in the early days of the revolution. Stalin launched a campaign called Khudzhum on International Women’s Day, 8 March 1927. Khudzhum means storming or assault. The campaign forced Muslim women to remove their veils in public.

Stalin’s attack did not liberate Muslim women but did the opposite; it meant that thousands of Muslim children, and especially girls, were withdrawn from Soviet schools and resigned from the Young Communist League. Girls who were forced to enter an arranged or polygamous marriage had no means to refuse without jobs or opportunities.

Stalin had not liberated women; he had pushed them back into the home. This matched his more general resurrection of the traditional family across Russia, which saw all women once again encouraged to prioritise motherhood. He had broken from the Bolshevik tradition, and had thrown away important gains of the revolution.

Today the attacks on Muslims, especially Muslim women, are still portrayed under the banner of women’s liberation, whether that is schools inspectorate Ofsted asking Muslim girls in primary school why they wear their headscarf, or armed police officers in France forcing a Muslim woman to undress on the beach.

Sadly, some on the left support these attacks. A major feminist coalition in France, CNDF, tried to stop Muslim women wearing the hijab from taking part in International Women’s Day demonstrations, placing it in alliance with the French imperialist state against its most oppressed women citizens.

Socialists must stand 100 percent with the oppressed when they are under attack and are fighting for their rights. We have to always maintain our politics and our understanding that class both shapes oppression and is the key to challenging it. 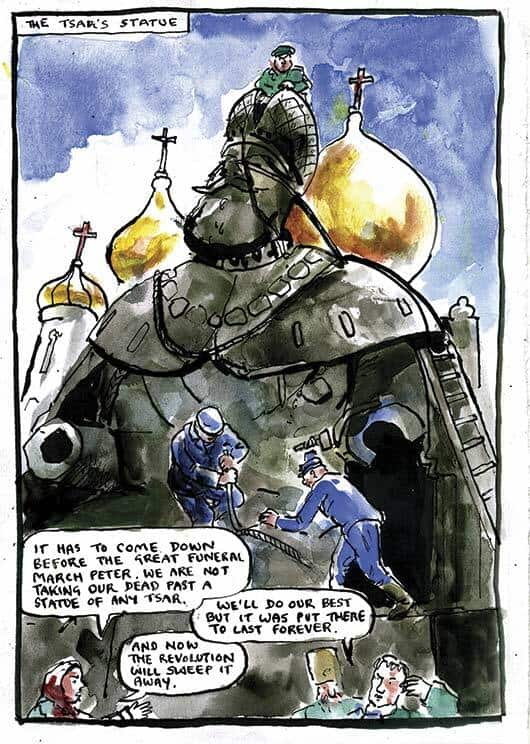 Islam and the Enlightenment