Following on from Tom Hickey’s article on the growing campaign for a boycott of Israel (Feature, Socialist Review, July/August), I thought readers would be interested to learn of a major success on this issue at the recent GMB union congress in June.

The GMB is the country’s third biggest union but for many years has has a contradictory position on Palestine.

While it is affiliated nationally to the Palestine Solidarity Campaign (PSC) it has also allowed Trade Union Friends of Israel (TUFI) to have a stall at its Congress. It has also sent lay and senior members of the union on TUFI sponsored visits to Israel. A major policy of TUFI is to “fight the boycott”. This is directly opposed to the policies of PSC and the GMB, which in 2011 decided “to take a lead in driving forward the disinvestment and boycott initiatives of companies who profit from illegal settlements, the Occupation and the construction of the wall”.

A resolution was submitted to this year’s congress which called for GMB members not to receive funding or otherwise be facilitated to either participate in TUFI sponsored visits to Israel or speak on TUFI platforms, and to send a representative on the next available PSC delegation to Palestinian territories.

This was opposed by the GMB leadership and it is extremely rare within GMB for its congress to overturn the leadership’s recommendation when resolutions are debated. But after some impressive and passionate speechs from the floor, the resolution was carried by a large majority.

This caused a storm within the Israeli supporting press. The Jerusalam Post ran a front page story on how a major union was forbidding its members to visit Israel – a complete distortion of the actual wording of the resolution. But it shows what can be done and supports Tom’s point that the success of the BDS movement has indeed been rapid and hopefully this example will encourage others to raise this issue within their own unions.

Some statues should stay

Can professionals be classed as workers? 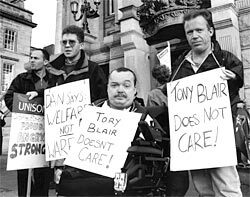