A Brief History of Seven Killings

This novel tells the story of the attempted assassination of Bob Marley in 1976, while he was trying to organise a peace concert aimed at ending violence in Jamaica.

“The Singer”, as Marley is known in the book, had hoped to unify warring groups associated with the two main political factions, the PNP and JLP.

Instead he finds himself the victim of a CIA-backed plot to stop the spread of communism in Jamaica.

A Brief History of Seven Killings is a multi-character novel with each chapter based on different protagonists who in varying ways are linked to the shooting of the Singer.

Papa Lo, the Don of a fictitious neighbourhood in West Kingston called Copenhagen City, is weary from years of fighting rival groups and becomes sold on the idea of peace in Jamaica.

However, others such as the anti-communist Cuban dissident Doctor Love have a very different agenda.

Doctor Love is worried by the increasingly close ties between prime minister Michael Manley and the Cubans. Therefore the doctor, along with several CIA agents, enlists the help of one of Papa Lo’s enforcers, named Josey Wales.

He attempts to stop the concert and destabilise the peace process by murdering The Singer, who they feel is in cahoots with Manley and the PNP faction.

Weeper, an enforcer for Josey Wales, struggles to come to terms with his sexuality in the macho settings of Copenhagen City.

Another character, Bam-Bam, reveals the sense of hopelessness felt by those living in the ghetto: “By the time boy like me drop out my mother, she give up. Preacher says there is a god-shaped void in everybody life but the only thing ghetto people can fill a void with is void.”

Although A Brief History of Seven Killings is a work of fiction it is remarkably well researched and as such is a useful guide to the regional politics of the time.

In the late 1970s Jamaica is a small country experiencing the ripples of the Cold War. By the late 1980s and early 1990s black communities in US cities like New York are plagued by crack cocaine.

It is at this time in the book that Josey Wales, once used by the CIA, becomes expendable and finds himself in jail awaiting extradition to the US.

The novel, at nearly 700 pages, is a lengthy read and its multi-character structure seems to break the flow of the story on a few occasions.

Nevertheless, James has a skill for developing his protagonists throughout the book which maintains the reader’s interest. 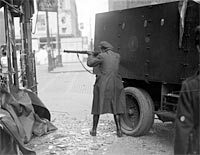 A Long Exposure: A century of turbulence caught by the camera

A New Twist on Dickens