Building a theatre of action

This article is over 6 years, 8 months old
The Workers' Theatre Movement developed out of the confident working class movement of mid-1920s Britain, but was later buried by the changing priorities of the Communist Party. Its radical legacy of performance by, for and about workers is uncovered by David Gilchrist.
By David Gilchrist
Downloading PDF. Please wait...
Tuesday 28 April 2015

The great upheavals of the First World War and the Russian Revolution led to a widespread questioning in British society; this applied no less to theatre. Following the example of Russia, which experienced a huge flowering of art following the revolution of 1917, workers in Britain saw the establishment, at first locally, and then on a national basis, of the Workers’ Theatre Movement (WTM).

The WTM came first from an idea by communist and poet Christina Walshe and was directly associated with the Communist Party (CP). In the turbulent years of the 1920s it grew into a network of over 100 groups that performed in local halls, on the streets and at workers’ rallies. It even boasted its own newspaper, Red Stage.

It developed the talents of writers such as Joe Corrie, a miner from Fife, who wrote a number of important plays including In Time of Strife, revived in 2013 by the National Theatre of Scotland. An early manifesto for the movement written by Walshe proclaimed that the Workers’ Theatre should focus on:

Plays would have to be simple so that they could be cheaply and easily performed in trade union or labour halls, and would “take the form of satirical comedy, farce, revue, tragedy and group speaking”.

The WTM developed out of a left wing tradition of performing. The Labour Party, following the example of the German Social Democratic Party, had set up choirs and dramatic groups. They saw the role of theatre as educational, acquainting workers with the great works of art and providing them with moral uplift.

Socialists looked to the work of William Morris, the flowing robes and goddesses depicted in Walter Crane’s engravings and the words of Oscar Wilde, who in The Soul of Man under Socialism represented socialism as everything that was “fine”. Capitalism on the other hand was “sordid”, “base” and “mean”.

These groups often performed works by the great Fabian playwright George Bernard Shaw. Shaw’s plays were naturalistic, that is, they sought to portray events exactly as they might look and sound, concentrating on the detail. Although humorous, they were rather wordy, with long speeches.

The WTM saw itself as breaking with this tradition. Rather than truth and beauty, they would concentrate on class struggle. They were influenced by the work of Russian agit-prop (agitation and propaganda) groups such as the Blue Blouses, named after typical Russian workers’ clothes. The WTM adopted this style, wearing only overalls and white shirts.

The WTM was also influenced by the German Arbeitertheaterbund (workers’ theatre association), agit-prop troupes under the direction of the Communist Party. The impetus for the WTM was built during the run-up to the General Strike of May 1926. In the years preceding the strike the Communist Party had organised the National Minority Movement, bringing together revolutionary and non-revolutionary rank and file workers across the country.

This period of activism flowed into cultural activities. In November and December 1925 the play Masses Man by German revolutionary Ernst Toller, recently released from prison for his role in the Bavarian Soviet of 1918, was performed 15 times by a Doncaster group in the mining villages around Doncaster and Sheffield.

A group from Woolwich staged a “Red Concert” at the Trafalgar Tavern on the Thames in February 1926 including a play with a character called “Red Rosa”. In Scotland, Joe Corrie’s group The Bowhill Village Players performed frequently to full houses of miners in the Bowhill Village Hall, with a capacity of 1,200. There were many more local groups in the great industrial centres of the country; the idea that the working class was the “coming class” was widespread and not confined to the Communist Party.

However, the general strike held out for just nine days in May, and it was in the aftermath that the WTM was formally founded as an organisation. It saw itself as a theatre of action and consequently dealt with many of the issues facing the movement in the immediate fall-out of the greatest general strike Britain had seen — victimisation, police persecution and attacks on the trade unions.

They began by performing plays but decided that this was not a suitable method of discussing these issues and so used sketches, cabaret and revue. Groups were set up with names such as the Red Megaphones, Red Radio and the Red Front.

The most influential early group was in Hackney, east London. It was founded by Tom Thomas who became a socialist after reading the Daily Mail — “disgust, turned to loathing” and he joined the Communist Party. His group, the Hackney People’s Players, gave their first performance in the Library Hall, Stoke Newington, supported by Hackney Trades Council.

Among the first works they performed was R.U.R. by Karel Capek, a Czech anti-militarist. The play tells of the use of mechanical men called robots, which become intelligent and overthrow their masters, an allegory for the coming workers’ revolution.

Thomas found that there was a lack of what he thought of as suitable material, so he wrote plays himself. His first attempt was an adaptation of a segment of Robert Tressell’s Ragged Trousered Philanthropists, a novel about the struggles of working people to become conscious and get organised. Its first performance was a great success.

The working class audience identified with the scenario and the use of popular language; the cast of 14 included two electricians, two clerks, a bookkeeper, an able seaman, a tailor, two housewives and two cabinetmakers. Thomas coined the phrase “A propertyless theatre for the propertyless class” — which meant no props and no costumes.

The WTM also had a Jewish section, Proltet, based in the East End of London. They hosted performances from the famous Polish Yiddish Theatre of Vilna. “The Woman Question” was central to the work of the WTM. They were keen to show the everyday life of workers, often dealing with women’s double burden, as workers and in the home.

Thomas wrote a number of plays with women as central characters: Women of Kirbinsk, dealing with a Russian village in which all the men have gone away to fight the civil war and the women solve all the village’s problems, and The Fight Goes On in which a young miner’s wife deals with the landlord and the mine owners after her husband is imprisoned for his part in the general strike.

The work of the WTM was integrated into the life of the CP. Its sketches and revues were often used to open meetings and rallies. They also worked extensively with the National Unemployed Workers’ Movement. In the years surrounding the general strike the CP had argued that, as revolution was not on the immediate horizon, revolutionaries must find ways to work with less radical workers — as they did through the National Minority Movement.

At the end of the 1920s the CP moved into the disastrously sectarian “third period”, arguing that revolution was imminent and that workers had to go on the offensive — and that those who supported the Labour Party were in league with the bosses. This wrong-headed analysis did, however, generate a period of frenetic activity for CP members, during which time the WTM concentrated on working in the streets using short, topical sketches and music and saw a leap in the number of groups around the country.

But this did not last. The CP again changed its line in the 1930s, dictated by Moscow. It met the rise of fascism with the popular front strategy in which the needs of the working class were to be secondary to building alliances with those “progressive forces” willing to ally with the Soviet Union against Germany.

The CP was no longer interested in backing workers’ theatre groups and closed many of them down. Moreover, the agit-prop style of the WTM had been developed in a period in which the working class was strong, organised and out on the streets. Arguments about the route of march could be had easily. In the more complex political situation dictated by defeat and the rise of fascism it no longer fitted.

Though the Communist Party attempted to bury all memory of the WTM, its radicalism and its legacy can be traced through the 20th century. The WTM saw itself as a modernist movement, breaking with the traditions of the theatre at that time, turning from realistic to symbolic representation. It attempted to get rid of conventional staging techniques, abolishing the curtain and the proscenium arch.

It was also innovative in repertoire, “interpreting the New Machine Age from a proletarian point of view”. It moved beyond the written text, using Russian theatre director Vsevolod Mayerhold’s physical acting style, Biomechanics, to develop a new physical form of theatre — and it did this with clerks, seamen, teachers and shop workers.

Many of its members went on to work in the popular front oriented Unity Theatre Movement in the 1940s and 1950s. It was to influence the development of theatre in Britain but not until the working class movement had risen again in the period after 1968. Then the techniques and methods of the WTM would be used by socialist playwrights such as David Edgar and the new alternative socialist theatre of John McGrath and his 7:84 Company. 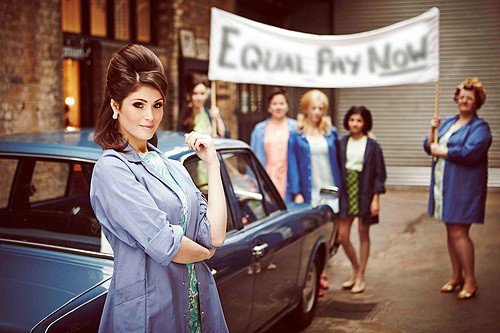 Live debates played out on stage