Can Men and Women be Equal?

Brick Lane is not the place it used to be. The hot bagel shops are still there but its proximity to the City of London and spiralling house prices have led to a proliferation of yuppie wine bars and the like. But how pleasant to come in from the cold to a trendy and neon-lit cafe to debate with an assorted company of some 50 people on whether women today have equality with men. This is the regular meeting place for the Tower Hamlets SWP Marxist forum.

Lindsey German leads off with an introduction about the changes that have gone on in women’s lives over the past century. The assembled crowd–lounging on sofas–listen with interest.

Lindsey observes that now women are able to control their own fertility many are choosing to have fewer children. Recent surveys suggest that among younger women almost a fifth will choose not to have children at all and almost equal numbers of women and men work. In countries like Indonesia and the Philippines similar features apply–birth rates are down and most women work and have access to education. We have witnessed a fantastic turnaround, argues Lindsey, so is it true–as some argue–that women have it all?

She points out that in other Asian countries and in many parts of Africa women do not have access to education and poverty and debt have worsened their lives. The conditions in the sweatshops of south east Asia are reminiscent of the way in which Engels described conditions in the north of England in the 1840s. The reality of women’s lives in the Nike factories of Indonesia are long hours, low pay and atrocious conditions.

In Britain many women work in call centres where there is constant pressure to perform and where even breaks to go to the toilet are restricted. Some 30 years after the equal pay act women still only earn between 50 and 80 percent of men’s pay. The pressure on women to conform to idealised supermodel looks has led to an ‘epidemic’ of anorexia and damage to women’s self esteem. As Lindsey notes, ‘There used to be a saying in the women’s movement in the 1960s and 1970s that biology is not women’s destiny…today women’s inequality is not biological and not intellectual but social.’

In a discussion on the contradiction between social production and privatised reproduction, Lindsey outlined the contradictory way in which capitalism contributes to the breakdown of the family and at the same time acts to prop it up. In less than 30 years the number of children brought up in a two parent family has decreased from 98 to 75 percent. Despite a very small percentage rise in remarriage overall marriage rates are drastically down. Yet insurance companies still estimate that it would cost £600 to 700 per week to insure a wife because of the amount of work they perform in the home. This is all unpaid labour. When looked at in this way it becomes apparent why it is in the interests of capitalism for us to reproduce privately. So since the Second World War we have seen a number of measures which are intended to back up the family, such as in family law and social work. Lindsey pointed out that during the Second World War there was state-run childcare provision for one quarter of those who needed it. Today, however, state-sponsored childcare is only available to one child in 20. Her conclusion was that the struggle of men and women for equality cannot be divorced from class.

The debate that followed was lively. A young media worker challenged the idea that after socialism we would choose not to marry and live together in a nuclear family. Another young woman asked whether during a socialist revolution men’s ideas would change spontaneously or whether there would need to be a process of formal education. A young man asked who was responsible for such negative images of women in the media.

In response to the first question one woman answered that part of the problem of choice in relationships was that childcare and having children were at present done in the nuclear family. Instead, she argued, they should be seen as being part of society–as being socialised. A local doctor said that over the past 20 years he had seen so many people’s hopes and aspirations smashed and their relationships destroyed by the pressures of work and poverty. Paradoxically, he argued, the types of social changes that Lindsey had outlined would help people stay together. Others mentioned the numbers of women on anti-capitalist demonstrations. They look at women like the campaigner Arundhati Roy and draw inspiration from her. But they do not see the likes of Condoleeza Rice who is part of the Bush administration as a sister, but as part of the problem.

The ‘New Lads’ phenomenon was discussed, with Lindsey arguing that she was convinced that this was a product of Thatcherism, ‘The “loadsamoney syndrome”–I can do just what I want and don’t have to worry about it. It is often argued that the working class is sexist and racist. But sexism comes from the top of society–from the likes of Kelvin McKenzie and Rupert Murdoch. New Laddism is promoted by the likes of them–then they turn around and blame the working class.’ As the meeting ended, the discussion continued with everybody saying how much they enjoyed the debate. 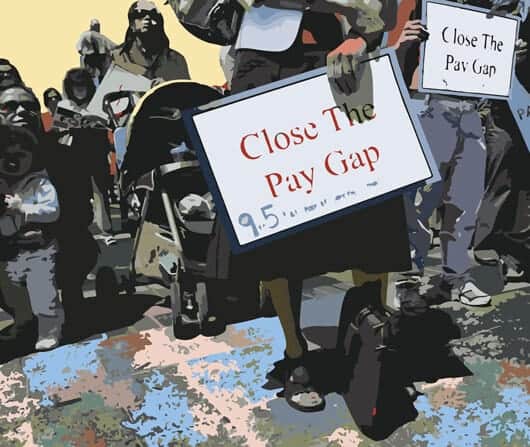 The fight for equal pay