This article is over 11 years, 2 months old
The plot of Chekhov's classic 1903 play is uncomplicated. An indebted Russian gentry family face having to sell their estate, including a cherry orchard. In the end they sell the land where their family has lived for generations to Lopakhin, a merchant, and leave.
By Colin Wilson
Downloading PDF. Please wait...
Wednesday 01 June 2011

What makes the play a classic – and what this production makes clear – is the meaning of these events for the family, their servants and hangers-on and for Lopakhin himself, in the context of the Russian society of the time.

This society was rapidly changing. Middle class Lopakhin is the son of a peasant and the grandson of a serf, a person owned as a slave by landowners. Serfdom had only been abolished in the 1860s – the family’s long-serving butler, himself a former serf, looks back to those times with chilling nostalgia. Lopakhin bolsters his fragile self-worth with his pride in having risen to be a landowner. He is a capitalist, a new phenomenon in Russia at this time. For him land is just a commodity – he will knock down the big house, uproot the cherry orchard and build profitable holiday homes.

For landowner Madame Ranevskaya and her brother Leonid the house and orchard are not just where they spent their idyllic childhood but the source of their identity.

Ranevskaya is generous and passionate – her life centres on a series of unhappy relationships, one of which has led her to attempt suicide. But she completely lacks the financial acumen to save her beloved orchard. There seems to be no place for her in Russian society – she has spent a lot of time in Paris, yet it’s clear that she is as unhappy abroad as in Russia.

Lopakhin and Ranevskaya can be seen as representatives of the rising capitalist middle class and the decaying aristocracy, just as the 30 year old student Petya expresses the views of the revolutionary socialist movement. All these currents played a part in early 20th century Russia. But the characters are far more than this – each of them is rounded and contradictory. We sympathise with the landowner Ranevskaya when she feels that life should be about more than money. We sympathise with the capitalist Lopakhin as he delights in overturning the established order. Petya is principled, but he’s also doctrinaire and humourless.

The Cherry Orchard contains a lot of humour, and can be seen as either a comedy or a tragedy. Director Howard Davies interprets the play as tragedy, in which the old order falls apart, to be replaced by shallow materialism. It’s a conscious rejection of a whimsical and nostalgic version of Chekhov where, as Davies says, the men wear linen suits and the women carry parasols – and a good thing too. You can argue that it’s mistaken to see the Russian society of this period as tragic when the October 1917 Revolution brought liberation to every area of Russian life. But Chekhov wasn’t a revolutionary, and there’s no point trying to make him into one. Altogether this is a fine production.

The Cherry Orchard is at the National Theatre until July 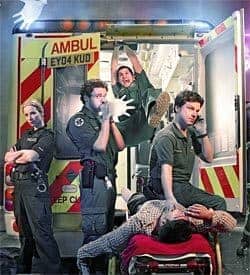