A Child in Palestine

The cartoons of the legendary Palestinian character, Hanthala, are composed into this beautiful collection.

One drawing sees a man holding his dead child in his arms, the child’s hands amputated and bloody, behind him a cinema screen reads “The End” – the horror in Palestine continues after the news finishes. Another depicts Mikhail Gorbachev and Ronald Reagan in bed under a duvet of the map of the world, with Reagan taking too much of the cover; an incredibly simple, yet powerful, image.

Within all these pictures is little Hanthala, most of the time silently watching events, sometimes crying, sometimes punching the air in anger; but always witnessing the atrocities and injustices.

My only criticism of this book is the captions, which tend to dictate interpretations, not giving the cartoons credit as pieces of art. At times they don’t translate the Arabic words into English, which I found very frustrating.

However, this is more than made up for by the art itself. This wonderful collection reflects al-Ali’s views on a world that has turned its back on his people. Hanthala has become a proud mascot of the Palestinians and symbolises their continued struggle for justice and resilience in pursuing that goal.

The power of al-Ali’s work can be seen in his untimely death in 1987 – assassinated on the streets of London by Israeli secret agents. 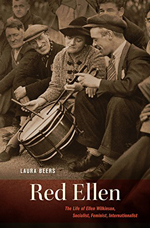