Classic Read: Our new series will revisit a classic novel each month

The year is 1913. “In Dublin Larkin flung his terrible phrase at the employers. “You’ll crucify Christ no longer in this town.’ The streets were shaking with the sound of his voice, the burden bearers were straightening their backs. They were multitude. There would be no escape from them.”

These lines are from James Plunkett’s great novel about Dublin in the years before the First World War, which has recently been republished. The book focuses on the effort to build Ireland’s first “general” trade union, among workers like carters, dockers and tram drivers. The action culminates in 1913, when the employers tried to break the union by shutting members out of their workplaces across the city. The “Great Lockout”, as it came to be known, brought riots to Dublin as the workers fought the police, the employers and the scabs.

The novel details the lives of a dozen male and female characters – workers, tramps, housewives, priests, company directors, servants and prostitutes – against the backdrop of these tumultuous years.

Workers like Fitz, Pat Bannister and Mulhall are central to the action, as well as Rashers, a tramp who lives in the basement of “Chandler’s Court”, the tenement building where Fitz and Mulhall live. Rashers’ experiences are such that he damns his home town as “the most misbegotten kip of a city in the whole wide world”. But Plunkett also makes a company director, Edward Yearling, one of his key characters. Yearling’s divided loyalties animate the sense that nothing in the city will ever be quite the same again.

The book also portrays the bewilderment of the priests who struggled to make sense of it all as their “flock” seemed to turn away from them. One, Father O’Connor, regards strike leader Larkin as a blasphemer, and actively opposes the strikes and demonstrations.

The Dublin Lockout was one of the final acts of the “Great Unrest”, a wave of industrial action which spread across Britain and Ireland before the First World War. Plunkett details the human calculations that go into the decision to fight. While some sections are bleak, there is humour as well, as people struggle to get by in grim circumstances.

One of the striking features of the book is its attempt to show the lives of women characters. Ireland in the 1960s, when Plunkett was writing the novel, was only just emerging from decades of economic depression, when emigration soared and the Catholic Church, with its narrow strictures on the family and sexual life, seemed all-powerful. The idea that women could have any sort of desires and hopes of their own, outside a very narrow framework, was anathema to the establishment.

Strumpet City was hugely popular in Ireland, especially in Dublin. Its republication – when the Irish working class faces impoverishment to pay for the mistakes of politicians and property developers – couldn’t be more timely. With the centenary of the lockout only two years away, we have to hope that for today’s bosses there will be no escape from the “multitude” this time.

Strumpet City has been republished by Macmillan, £9.99. 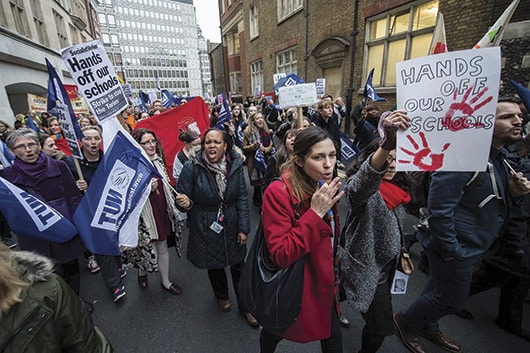 There's a change in the air

Crying Out for Leadership