This article is over 18 years, 9 months old
Having failed to steamroller the United Nations Security Council into supporting its invasion of Iraq, the US has created a tinpot 'coalition of the willing' instead.
Downloading PDF. Please wait...
Wednesday 09 April 2003

Although the military assault is an almost entirely US/British affair (with a little help from Australia), the US is boasting that 48 countries back its crusade, although 19 of the named countries are offering only ‘moral’ support.

This is unsurprising given that it includes such military heavyweights as Iceland, Micronesia, the Marshall Islands (population, 65,000) and the Pacific island of Palau.

The list also includes a number of Baltic states desperate to prove their Nato credentials. The prime minister of the Solomon Islands, which the US named as part of the coalition, said his country ‘wishes to disassociate itself from the report’.

More intriguing ace the dozen or so ‘silent partners’–states that have not been named for reasons of political sensitivity. They most likely include Israel, as well as Arab states hosting US forces such as Kuwait, Qatar, Bahrain and Jordan, and are being withheld to avoid further unrest in the region. They may also include Germany–nominally against the war but allowing the US access to its land bases.

In an apparent attempt to please the organ grinder, a Moroccan newspaper has reported that its government has offered the US 2,000 monkeys to act as land come detectors–although presumably only when it finishes cluster bombing. 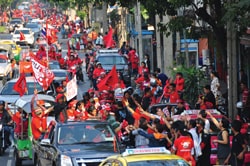 Memories Were Made of This