This article is over 4 years, 8 months old
By Simon Assaf
Downloading PDF. Please wait...
Tuesday 02 May 2017

Donald Trump’s “America First” is fanning trade wars across the Atlantic and Pacific, a confrontation with China over North Korea, and hot wars in the Middle East and Afghanistan. The complex conflicts pitting global and regional powers against each other mark a military fault line that has terrifying consequences.

The coterie around Trump wants to overcome the US defeat in Iraq by attempting to re-impose US hegemony over a confident Russia, Iran and their allies, as well as checking Turkey’s regional ambitions. Caught under it all are the peoples of Afghanistan, Syria, Iraq, Yemen, and Kurdish regions, who are being ground down by wars over which they have little control.

In one of his first pledges since becoming president, Trump gave his generals free rein to fight battles in Syria, Iraq and Afghanistan. Gone are any of the Obama administration’s restrictions over military decisions. US commanders no longer need permission to order air strikes or call up more troops — and the consequences have been devastating. Mosques full of families, crowded market places and neighbourhood buildings bear the toll of a terrifying spike in civilian deaths. These countries have become free fire zones for Russia, the US, Turkey, Iran and the many “pragmatic” local alliances.

Much to the applause of liberals and Democrats, Trump used the Syrian regime’s latest gas attack on a rebel town to flex US fire power. He launched a barrage of missiles at a Syrian airbase, but not before telephoning the Russians so that Syria could fly out its warplanes first. Such is the nature of this military bluff and bluster.

Then Trump dropped an 11-tonne MOAB “barrel bomb” on an isolated Afghan ISIS cave network near the border with Pakistan. This is the biggest non-nuclear bomb dropped, ever, but on a marginal Islamist faction that has been, ironically, more a thorn in the side of the Taliban than the Afghan government.

Meanwhile Russia is turning up the heat by arming the Taliban with heavy weapons, ostensibly to fight the same ISIS enemy. These guns are now tipping the balance against the Western backed Afghan forces. The US has responded in turn with more boots on the ground. The “long war” is getting longer, with no sign of victory since it was declared some 16 years ago.

The US footprint is also getting heavier in Iraq and Syria. The tortuous battle over Mosul shows no sign of easing and there has been no downgrading of the alliance built by Obama between the US, the sectarian Iraqi regime and its Iranian allies to conquer western Iraq. But Turkey is now backing its designs over Kurdish regions of northern Iraq with more military incursions.

In Syria global and regional powers are in a race to grab areas of influence as the country disintegrates. Hundreds of US troops have been deployed into the north east of the country for the coming fight over ISIS-held Raqqa. Russia and Turkey, along with their allies, have the same ambition for the city.

There is a race between the three powers over who will seize the city once ISIS is defeated. At one point US and Russian troops moved to check the advance of Turkish tanks on the strategic northern city of Manbij. The US commander admitted that his soldiers were “only a hand grenade away” from Russian and Syrian troops.

As well as upping the stakes in Syria, Trump has freed Saudi Arabia from any restraint in its two-year war on Yemen. In an acceleration of military intervention the US launched more attacks on Yemen in March than the whole of last year, with growing numbers of American ground troops fighting Sunni Islamists, while Saudi Arabia ruthlessly bombards Houthi rebels allied to Iran in the north.

The United Nations estimates that over 10,000 civilians have perished in this war so far, some 10 million people are without water or homes, and amid the “collateral damage” is the destruction of countless and irreplaceable historic buildings. This regional struggle over Yemen has driven its people to the edge of famine.

China is now wading into this complex mess of wars. Chinese energy giants were the biggest winners in the scramble for Iraq’s oilfields after the invasion of Iraq, and now it is placing itself as central to future reconstruction of Syria. Despite its growing strategic importance China still relies on Western troops to protect its interests, and remains at the mercy of the US in guaranteeing these new found assets. But it is stepping up its influence. China is to build its equivalent of the US Predator drone in Saudi Arabia as part of a £50 billion arms programme with the kingdom while making a deal with Iran, Saudi’s biggest regional competitor, to rebuild its heavy water reactor.

This move underwrites China’s interest in maintaining the nuclear agreement between Iran and the West. Neither deal has been welcomed by Trump. These remain dangerous and unpredictable times, but what is certain is that every act by the superpowers has made the region even more unstable. 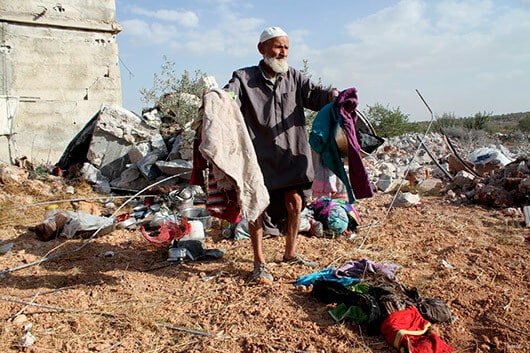 A scramble for Syria