The subject of this book is so-called “intelligent design”, the idea that the biological world is so complex that it could only have arisen through the work of a creator.

This was once the accepted view of society, until Charles Darwin showed in the mid-19th century that all organisms on earth, including human beings, evolved through the process of natural selection. Now right wing fundamentalist Christians in the US are trying to foist this discredited idea back upon us.

It is a sign of how influential such views are in the US that both John McCain and Sarah Palin, the respective Republican presidential and vice-presidential candidates, argued during the recent election campaign that creationism should be taught alongside evolutionary theory in state high schools.

In fact, as this book clearly shows, while creationists try to present their arguments as being in the spirit of reasonable scepticism and scientific enquiry, in reality their aim is to win widespread acceptance for the idea that everything on earth, in both the natural and human social worlds, is ultimately subject to god’s will. This can be a very useful argument in getting ordinary people to accept their lot, in an era of economic crisis and global warming, instead of pointing the finger at those who have got us into this mess.

In answer to such a view, this book presents a very readable and powerful case for the concept of materialism, here meaning simply an explanation of the world around us without recourse to the supernatural, whether that means a god or some other mystical force. The authors present a fascinating history of the growth of reason, starting from the Ancient Greek philosopher Epicurus – the first person to come up with a fully worked out materialist position – through the advances in understanding of the Renaissance and the Enlightenment, right up to Darwin and Karl Marx.

However, this is far from being simply a history of philosophy. Instead it comes up with some of the clearest arguments I have read for how life in all its complexity managed to emerge from the primeval swamp without the need for a helping hand from some invisible deity.

Importantly, while this book reveals beauty and grandeur in a natural world ruled purely by blind chance, it is clear that the growth of human understanding is precisely about recognising that only we are masters of our own destiny. 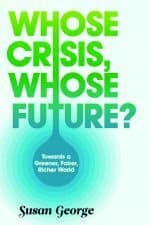 Whose Crisis, Whose Future?

John Berger — a radical vision of how we understand art