The Curious Incident of the Dog In The Night-Time

“The Curious Incident of the Dog in the Night Time” is a touching and humanising insight into the autistic mindset of Christopher Boone. The play is a heartening exploration of truth, pain and complication. This adaptation is a triumph, and the setting I saw it in is a step in the right direction for art.

The show played at the West End’s Apollo Theatre from March last year until, on 19 December, the ceiling fell in during an evening performance and 70 to 80 people were injured, seven seriously.

While waiting to reopen on 24 June, the show is being performed in small and intimate venues, in a low-tech rehearsal style, to students and young people. I was lucky enough to catch one of these showings at Stratford Old Town Hall in east London.

The showing was organised by the late Joan Littlewood’s People’s Theatre, the Theatre Royal. True to her legacy, the Theatre Royal made this performance free to all Newham residents, in their mission to make theatre accessible to ordinary people.

I am glad to have seen the show in this setting, as the nature of the venue, the company’s choice to perform “in the round”, and the entertaining nature of the play made suspension of disbelief unavoidable.

The intimacy of the venue complemented the play’s set up as a rehearsal of a play written by the book’s lead character, Christopher Boone. It is the painful story of this obsessive, sensitive and brilliant character’s investigation into the murder of his neighbour’s dog. He uncovers the dishonesty, pain and complication of adult life which he struggles to understand.

This play hints at a debate in education as to the legitimacy of special needs schools. Christopher is given invaluable attention by his teacher, Siobhan, who helps him to walk the audience through the play.

Furthermore, the play explores the nature of truth and the morality of lying, through Christopher’s identification of theatre as dishonest, and the dramatic effects of “grey lies” his father tells, portrays the difficulty of integrating and bringing up those with different levels of understanding.

Mike Noble’s touching portrayal of Christopher helps the writer’s audience to understand and empathise with his autism, his love of distinction, difficulty with trust, empathy and emotional expression.

The unsung hero of the cast is Trevor Fox, who honestly portrays Christopher’s dishevelled, broken and morally questionable father, Edd.

This is probably the best play I have ever seen. It is painful and touching. I would encourage you to book a ticket for the play’s reopening at the Gielgud Theatre. 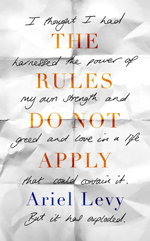 The Rules do not Apply