This article is over 19 years, 6 months old
Review of 'Crisis', exhibition by Jess Hurd and Alke Schmidt, Vaults @ The Foundry, Shoreditch, London and of 'You are G8, We are 6 Billion' by Jonathan Neale, Vision £10
By Martin Empson
Downloading PDF. Please wait...
Wednesday 03 July 2002

‘Crisis’ is an exhibition on the political upheavals of globalisation and the struggle against war, violence and injustice. Centred around key events such as the protests at the G8 summit in Genoa last year, the recent war in Afghanistan and the Middle East, and the rise of the anti-war movement, the exhibition features the images of Alke Schmidt and the photographs of Jess Hurd.

Sometimes it’s easy to forget that just one year ago over 300,000 people took part in the biggest anti-capitalist demonstration Europe had seen. Thousands travelled to Genoa to voice their anger to the heads of the eight most powerful countries in the world.

But demonstrations don’t happen spontaneously. Hundreds of activists across Europe were involved in planning transport, organising the marches, discussing slogans and debating tactics. For those of us involved ‘behind the scenes’, to see it all come together was an inspiring event.

Jonathan Neale was a member of the Genoa Social Forum that planned and coordinated those protests. His new book, ‘You Are G8, We Are 6 Billion’, is a first hand account of the events leading up to that demonstration and the aftermath. Invited onto the GSF, partly as a result of a typically impassioned speech at an organising meeting some months beforehand, Jonathan was involved in many of the most crucial discussions and debates before and after Genoa.

Written in Jonathan’s inimitable style, this book gives a wonderful feel for those exciting times. But also this is an attempt to explain the anti-capitalist movement to look at the issues which brought 300,000 to the streets of Genoa, and to show why the events of 11 September and its aftermath have failed to dampen the movement. 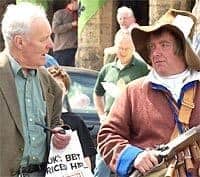