In Defence of the Terror

George Orwell said that, thanks to Dickens, the popular image of the French Revolution was a pyramid of severed heads. On this version the revolutionary events in France started out as a struggle against oppression and ended up as a bloody tyranny with the revolution devouring its own children. And what goes for the revolution in France goes 10 times over for Russia in 1917 – all revolutions end in repression, it’s the inevitable result of our flawed human nature.

This little book sets out to dispel that myth. The author points out that the violence in France was employed by the people when the institutions of the state would not, or could not act in defence of the revolution. So the notorious September massacres in 1792, when royalist prisoners were taken from the gaols and executed, took place because the courts and the government refused to take action against counter revolutionary plotters at a time when the Prussian army had invaded the country and openly threatened to drown the revolution in blood. This was a reactive violence.

Nor was it the case that the leaders of the most radical wing of the revolutionary government, the Jacobins, were the bloodthirsty despots of popular legend. They agonised over the morality of violence and killing, and the institutions they created – the Committee of Public Safety, Law of Suspects, extraordinary tribunal and so on – were designed to avoid generalised slaughter and vengeance. “Let us be terrible to save the people from being so” was their slogan.

The focus on the terror by modern opponents of the revolution (and there are plenty of them) ignores the historical context. As Mark Twain wrote “There were two ‘Reigns of Terror’ if we would but remember it and consider it; the one wrought murder in hot passion, the other in heartless cold blood; the one lasted mere months, the other lasted a thousand years.”

I mentioned Orwell at the beginning. This book would drive him to distraction. It’s written in an annoyingly obscure style in places (it probably read better in the original French) but if you can get passed that it’s a valuable essay on violence and revolutionary morality.

In Defence of the Terror is published by Verso, £12 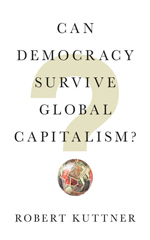