First, as the title suggests, they’ve made a clear case for housing to be higher up the mainstream political agenda. Second, they relate housing to wider theoretical debates, including Marxist analyses of its place in capitalist society. Third — and unusually for a book written by academics — they have given space to the many campaigns and activists challenging the neoliberal dominance of housing policy. As one housing campaigner said to me, “We needed this book”.

In Defense of Housing is an excellent introduction to the subject (with extensive references for further reading) and should provoke discussion for how we give housing the prominence it deserves.

Madden and Marcuse’s opening argument is one that often escapes more arcane policy debates — ultimately housing is about politics. They also question the entire socially-constructed concept of the housing “crisis” by arguing, as Friedrich Engels did in 1872, that under capitalism, this crisis is endemic. But they also describe how housing has now become deeply embedded within networks of global finance where it is treated as an exchange commodity, rather than an important social asset or essential shelter.

The authors discuss French Marxist Henri Lefebvre’s “Right to the City” — “a demand for a transformed and renewed access to urban life” — a theme that’s been prominent in US and “developing world” housing campaigns, but has had less resonance in the UK.

This is a contrast Madden and Marcuse don’t explore, but which raises some of the important distinctions between countries where housing has never been incorporated within the welfare state and the UK, where council housing has played that role. However, the book does point to some of the difficulties of framing housing campaigns within a potentially superficial concept of “rights”, without fundamentally challenging the existing system.

A particularly valuable feature of the book is its exposition of the nature of housing campaigns and the different problems they can face. Based on their extensive knowledge of the situation in New York City, Madden and Marcuse describe the difficulty of uniting and sustaining movements for housing justice against a background of personal and sectional differences.

They show how housing policy is deliberately skewed to protect the privileged and maintain an ideological grip on social consciousness. But they also show that determined, united campaigns can — and do — win. The system of public housing and rent control in NYC was achieved through struggle and allows millions of working class people, who would otherwise not be able to afford it, to live in the city.

Now more than ever, we need to defend the housing victories of past generations and extend them for the next. The UK’s Housing and Planning Act threatens to turn back the clock to a time when there was no alternative to under-regulated slumlords. It’s already happening, but it’s not too late.

In Defense of Housing is an accessible, jargon-free account of how housing works under capitalism and a clarion call for how we can — and must — change it. 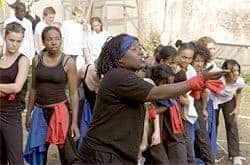 The National Youth Theatre's dramatic approach to the question of identity