Digging at the Roots of Dissent

Last year a lot more happened in Italy than demonstrations in Genoa. In May the Blairite DS party lost power to Berlusconi. The party then split over what to do about the Genoa protests. Then the leadership supported the war in Afghanistan and the party squabbled some more. In the party’s brief life it has only suffered from ‘exitism’, not entrism.

Last month the DS held a rare public rally in central Rome. Some 4,000 people came–not many for a party which still has more popular roots than New Labour. The leadership thought they would end with a bang by inviting popular film director and DS supporter Nanni Moretti to give the final speech. He didn’t disappoint them. ‘The bureaucracy stood up here behind me hasn’t understood a thing,’ Moretti shouted. Pointing towards the Italian equivalent of Blair, he continued before storming off, ‘We’ll never win with these leaders.’

Paul Ginsborg’s book has got to the bottom of this crisis. It is a massive work about the last 20 years of a country which has the fifth largest economy in the world and a rate of car ownership second only to the US. The detail is sometimes breathtaking. But there is more than this. Ginsborg wanted to ‘write history not only from the top downwards, but also from the bottom upwards’.

The pivotal event of his whole account is the collapse of the Christian Democrat and Socialist ‘regime’ in the early 1990s. Ginsborg outlines the many ‘warning signs’ in the preceding years. People began demanding and voting for electoral reform, regional autonomy surfaced in the shape of the racist Northern League, a head of state continually discredited the institutions, voting in elections declined sharply, and the stream of sleaze was never-ending regardless of which party was in power.

One thing which emerged from this crisis was a kind of ‘do it yourself reformism’. By 1994 nearly 5 million volunteers dedicated large amounts of their spare time to all sorts of causes–work with old people, immigrants, drug addicts, blood donations–bitterly aware that both the state and the market were failing to come up with the goods.

This is the background to the social forum movement which exploded just after Ginsborg finished his book. From these seeds a mass movement has grown. Many of these people were and are middle class. The main problem with the book is that Ginsborg believes the urban middle classes are now the majority of society and the key to changing it. He implies that white collar workers are not forced to work for a living, are not badly paid, do not feel humiliated at work and, crucially, don’t come together as a powerful collective force.

But as this book was leaving the printers 90,000 bank workers took national strike action in Italy, shutting nine banks out of ten. The day I finished reading it rank and file groups had brought 150,000 striking workers, mainly teachers, onto the streets of Rome to protest against anti trade union laws and cutbacks in schools. The general strike of November 1994, the biggest in the country’s history and one which broke the back of Berlusconi’s first government, gets just one paragraph.

It seems that Italy is a few years or months ahead of Britain–in both countries huge demonstrations are now being called although not by unions 0r Labour-type parties. Ginsborg constantly draws comparisons with Britain, and it is true that the left is undergoing a profound realignment in both countries. In Italy in particular a mass movement from below is beginning to gain the initiative over traditional organisations. Criticisms aside, this book is an essential starting point to understanding one of the most politically interesting countries in the world today. 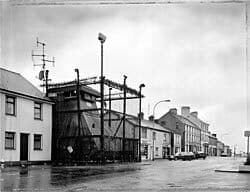