Dissent in the ranks

This article is over 12 years, 10 months old
The war in Iraq left the country in ruins and the occupation in Afghanistan is being questioned on a scale not seen since the 2001 invasion.
By Judith Orr
Downloading PDF. Please wait...
Thursday 01 October 2009

The “good” war has gone bad. General McChrystal, the new US general appointed by Barack Obama to turn the war around, has said that without more troops the West will lose. Nato troops have been occupying Afghanistan for eight years and have largely avoided the scrutiny and opposition that the occupation of Iraq received. The warmongers have managed to hide behind the myth that Afghanistan was a just war against the Taliban, who oppressed women and provided shelter for Al Qaida. But no longer.

The imperial project of the US, with Britain still clinging on to its coat tails, is in crisis. The official occupation of Iraq is over but at least 50,000 foreign troops will remain and much of the occupation is being privatised to companies like Blackwater and ArmorGroup. The dire situation there, as described overleaf by Sabah Jawad, is not one that can be spun as a victory for the US.

So the stakes are high for the US in Afghanistan if it is to maintain its role as the world’s global bully, especially as the economic crisis has hollowed out its potential to enforce its hegemony by any other means but military dominance. But the war has drawn in and threatened to destabilise Pakistan – a key Western ally in the region. In both the US and Britain public opinion sees the war in Afghanistan as unwinnable and unjustified and, as Dahr Jamail points out in his piece, serving US soldiers have begun to speak out publicly against the war.

In Britain the turning point for the public’s perception of the war in Afghanistan was this summer. In this short space of time the rate of soldiers’ deaths became the highest since the war began. For the first time families of soldiers serving there began to question the justification for the war. The aims of the war appeared to be different every week. Gordon Brown said it was to keep our streets safe from terrorism, then it was to bring “democracy” to the country and to banish sharia law. Recently he has resorted to simply asserting that we need to support our boys and has encouraged military parades to bolster this aim. But this can have, and sometimes has had, the opposite effect.

Deep cynicism about politicians and their self-serving motives has led even those who support the troops to question the need to send them to Afghanistan. Even the demand for better equipment – though not one anti-war campaigners raise – reflects people challenging the government’s priorities. The slogan that the best way to support the troops is to bring them home now has a resonance way beyond established anti-war campaigners.

The US has attempted to change tack and argue for winning Afghan hearts and minds by prioritising the protection of civilians’ lives. This was quickly exposed as a sham when an air strike on two oil tankers that the Taliban had hijacked killed up to 100 civilians queuing to receive free fuel. Ironically, it appears the German military ordered the air strike to avoid sending in ground troops that might have led to casualties that would have fed the anti-war sentiment in Germany in the lead-up to elections.

Many people are now questioning why so many lives are being sacrificied to prop up Hamid Karzai’s openly rotten regime – as illustrated by the corruption and fraud that helped him to be re-elected. Jack Straw tells us that “free and fair elections” were never promised and couldn’t be expected. But this was precisely the justification for the extra troops sent in August to take part in the much heralded “Panther’s Claw” mission that resulted in the dramatic increase in soldiers’ casualties.

This growing mood against the war in Afghanistan is also fuelled by anger about every other aspect of Gordon Brown’s policies and priorities. The Labour government looks bankrupt, both literally and politically, and weak. Its support is rock bottom. This provides an opportunity for socialists in the coming months to unite the different struggles breaking out and offer an alternative to war, imperialism and crisis.

Follow the money: the "war on terror" and the multinationals who are profiteering from it

The war in Afghanistan is not a noble cause 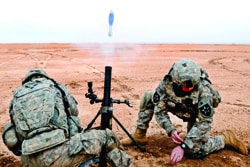 Afghanistan: the elephant in the room