This article is over 8 years, 9 months old
Two galleries in central London are currently hosting exhibitions devoted to major 20th century artists. The Barbican's show, entitled The Bride and the Bachelors, focuses on the work of pioneering French artist Marcel Duchamp. Meanwhile the Tate Modern has unveiled its latest blockbuster, a retrospective devoted to the Pop Art paintings of Roy Lichtenstein.
By Anindya Bhattacharyya
Downloading PDF. Please wait...
Monday 01 April 2013

Yet the two shows take quite different approaches to their subjects, suggesting two different underlying attitudes towards popular culture. The Barbican exhibition is steeped in history, tracing the connections between Duchamp and a generation of younger US-based artists directly influenced by him. The Tate’s show is much more straightforward, and ends up as flat and featureless as Lichtenstein’s canvases.

The starkest difference lies in the use of space. The Barbican exhibition cleverly exploits the gallery’s unusual split-level design. The ground floor is devoted to Duchamp’s major works, and is dominated by his 1923 glass sculpture The Bride Stripped Bare By Her Bachelors, Even. All this is overlooked by upper level rooms that explore Duchamp’s post-war collaborations with the composer John Cage, the choreographer Merce Cunningham and the visual artists Robert Rauschenberg and Jasper Johns.

Lichtenstein and Duchamp were both fascinated by the mass culture that emerged in the US and Europe during the 20th century. But here too there’s a difference. Lichtenstein was drawn to the banality of consumer capitalism. He used techniques from advertising and mass media to paint detached, clinical studies of golf balls, tyres and other everyday objects.

Duchamp also takes everyday objects as his starting point, but subtly alienates them, making them seem strange and sinister. His infamous “readymades” are a case in point. Duchamp took mass produced commodities – a bottle dryer, a bicycle wheel, a urinal – and transplanted them to a gallery setting, thereby transforming them into artworks. This manoeuvre, inspired by the anti-authoritarian Dada movement that Duchamp was involved in, paved the way for the Pop Art of 1950s and 1960s.

Duchamp’s obsession with chance was picked up on by John Cage, whose music incorporates “aleatory” random elements. Famously Cage’s piece 4’33” comprises four minutes and 33 seconds of “silence” – or more accurately, turns that duration of background ambient noise into music. The Barbican exhibition includes two automated grand pianos that intermittently play Cage compositions. You can look down and watch as the keyboards are played by ghosts.

The real triumph of the Barbican show lies in the way it is both accessible and ambitious. It lays out a tangled knot of cross-connections between different artists and disciplines, but leads the viewer through it step by step.

The Tate show, in contrast, raises questions but leaves them frustratingly unanswered. The focus on elevating Lichtenstein into a Great Artist worthy of a prestigious retrospective comes at the expense of explaining the context of his work.

An “art about art” room houses Lichtenstein’s recreations of classic paintings, but fails to supply any of the originals to compare them with. The formal aspects of his work – how do the dots work in creating illusions of colour and depth? – are never adequately explored. The tumultuous social and political context of the 1960s, when Lichtenstein produced his key works, is missing altogether.

Of course, any exhibition of this nature is big business and it would be fatuous to counterpose the “commercial” Tate show to the “artistic” one in the Barbican. But seeing the two exhibitions together does highlight the limitations of the Tate’s blockbuster formula, how it can end up reducing an artist to a series of easily digestible clichés, in contrast to the Barbican’s more imaginative and experimental approach.

Ultimately, however, one can’t help wondering if the difference lies in the artists themselves. Lichtenstein clearly delighted in the world of popular culture around him, but the coolly ironic nature of his art makes it all too easy to absorb him back into the high art circuit. Duchamp’s subversions run deeper. The undermining of sense, order and authority is drawn from an earlier more revolutionary age. A hundred years on and we still don’t know quite what to do with him. 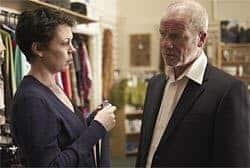 Tyrannosaur: A powerful allegory of friendship and abuse