This article is over 9 years, 9 months old
Companies still rely on states to protect their profits
Complex supply chains give groups of workers a lot of power to halt production
By Colin Parsons
Downloading PDF. Please wait...
Thursday 01 November 2012

Globalisation emerged as a fashionable concept in the years after the ending of the Cold War. Neoliberalism had established itself as the new economic orthodoxy in the West during the 1980s, preaching the need for privatisation and attacks on the welfare state.

With the disintegration of the Soviet Union, champions of neoliberalism declared “the end of history”, expecting an end to any systemic opposition to capitalism. Globalisation was to sweep the free market, unfettered and unregulated, into former “communist” countries and beyond.

Globalisation was trumpeted as a new stage in the internationalisation of manufacturing and services, which both governments and workers were virtually powerless to resist. Globalisation meant multinational companies could move their activities round the world at the drop of a hat, searching out the lowest wages in a global race to the bottom.

These arguments have serious implications. If true, they mean workers must accept low wages and poor conditions because foreign workers will accept less. States must avoid taxing a company too much or their investment will find a more welcoming home overseas.

Like all good cover stories, these arguments are based on half-truths.
The global nature of capitalism is nothing new. In 1848 when capitalism was still in its infancy, Karl Marx wrote that a “constantly expanding market chases the bourgeoisie over the whole surface of the globe. It must nestle everywhere, settle everywhere, establish connections everywhere.”

Nevertheless, it’s true that capitalism has evolved in the last 30 years. In Britain, until the election of Margaret Thatcher, the state owned large and important sections of the economy – coal, steel, telecommunications, the railways and more. Where the state didn’t directly run industry, big businesses often had very close ties to the state, relying on it for protection from international competition.

Since then privatisation has opened many areas of the public sector to profit-making and international competition. But this doesn’t mean businesses don’t still rely on states – the two remain closely tied together.

This is because states perform a number of essential functions to prop up companies based in their territory. States provide the framework within which the exploitation of workers takes place – they set labour laws tax rates, and impose duties on foreign imports. States have a near-monopoly in the use of armed forces through their control of police forces and armies. They regulate capitalism through the judicial system and try to protect the money supply, sometimes through central banks.

Governments may also provide welfare services. Though these are genuinely beneficial for the working class, and usually have to be won by workers through struggle, a healthy and well educated workforce is also essential for business. Most of these tasks, though essential for companies to continue making profits, are not necessarily profitable in and of themselves – so companies rely on states to perform them.

One of the main myths of globalisation is that companies are no longer dependent on a single “home” state and can move abroad on a whim. But in truth most multinationals still do a very substantial amount of their business in a single “home” country. The bank bailouts testify to big companies’ continual reliance on home states.

It’s true that multinationals seek out relationships with “foreign” states too. But this doesn’t mean they can dispense with the protection of states – instead they are forced to carefully cultivate relationships with multiple states, sometimes using their home states to pressurise other states with which they have a relationship.

Large units of multinational capital cannot, on a whim, up and move their production to a source of cheap wages. Companies rely on supply and distribution networks and infrastructure. They invest in machinery, factories and in training skilled workers. Transferring all these abroad can be very costly. In seeking the most profitable investment, wage levels form just one factor in a much bigger calculation.

In fact the integrated forms of production that companies rely on can leave them extremely vulnerable to organised workers. “Just in time” production methods mean that strike action, even by a small group of workers, can have an impact along the production chain and bring operations to a standstill.

Even the biggest multinationals are not immune. Last month in Illinois temporary warehouse workers won a three-week strike against Walmart, which had tried to sack them when they organised to improve safety. Disruption at a key distribution centre made Walmart think again. As one of the workers put it, “This place is very strategic…It’s at the heart of Walmart. You clog it up, you can give Walmart a heart attack.”

Next month: Can economic planning work?

The Recession Strikes Back 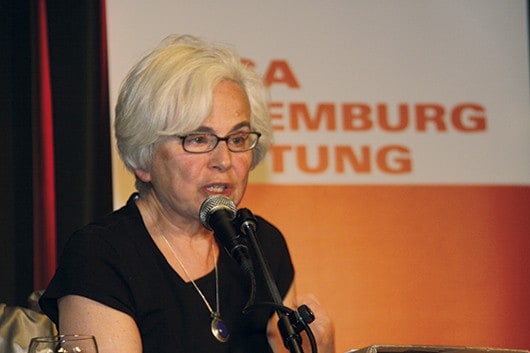