This article is over 19 years, 10 months old
Labour's crude currency of success in education is the market.
By Nick Grant
Downloading PDF. Please wait...
Saturday 07 September 2002

Are you aware of the state of education in Britain today? For example, do you know how many of these institutions are in your area: city learning centres, city academies, children’s centres, pupil referral units, early years centres, specialist, advanced, beacon, special measures, training or special achievement schools?

Are the adults in charge of your kids any of the following: advanced skills, leadership spine, post-threshold, agency or fast-track teachers, teaching assistants, learning mentors or enterprise partners? Is your local school cleaned and fixed by private or public employees? Is Jarvis, Amey or Serco running your LEA?

Not sure? Don’t worry, because increasingly few of us who work in education know what’s going on. ‘Initiative fatigue’ is endemic. The National Union of Teachers’ Annual Report for 2001 listed 39 different topics on which it held ongoing consultations with the Department for Education.

Downing Street would have you believe that primary standards are soaring while secondary schools let kids down, that pupil misbehaviour is more of a threat to standards than teacher shortage, that headteachers need more powers, and that LEAs and the unions are scared of change. It’s like the tale of the emperor’s new clothes–who will have the courage to yell, ‘Fake’?

We must fundamentally challenge what the purpose of education is. This involves addressing two strands of current government propaganda. The first Blairite bluff is that education can fix anything and everything. Education is the answer to teenage pregnancy rates, Britain’s Olympic medal tallies, alcohol and drug abuse, obesity, the decline of religion, even the paucity of British film-making. In this scenario schools are actually divorced from links to society and seen as autonomous mind-fixing factories, which should perform equal marvels of productivity whether they are located in, say, Cheshire or Liverpool. Local unemployment or crime levels, their logic insists, can be sorted simply by academic effort. The latest can-do evangelist at the Department for Education is David Miliband MP, minister for school standards. He told trainee headteachers on 8 July, ‘As I say to people in my own constituency, an ex mining community blighted by industrial change, we need to aspire to above average education to give children in disadvantaged communities average life chances.’

The Education Act 2002 now allows schools to open in-house medical and adult education services. On the face of it this is not a bad idea as it is wasteful for public amenities to lie unused for long periods. But this will not be accompanied by an increase in funding. Privatisation and increased control from Westminster mean that local councils are left with minimal staffing and few powers of intervention.

Thus schools have become the all-purpose panacea, the one-stop solution to any government headache. The irony here is that Labour’s rhetorical cover for dismantling secondary comprehensives is that, in their terms, one size does not fit all. Of course, any society benefits from the technical skills of literacy and numeracy fostered in school. And we should vigorously defend the right of refugee children to go to their nearest primary or secondary, rather than being schooled in a detention centre. But so much government effort has been about prescribing what should be done to kids, with little thought about how we all learn. As the theorist Froebel insisted, schools should see the stimulation of ‘voluntary activity’ as their goal.

This presumes a world very far from a state centralised national curriculum, performance league tables, staff paid by results and schools funded by bums on seats. The supplanting of cooperation with competition as the key school ethos is leading to cheating when it comes to Sats. There is a high level of disaffection and boredom with an approach to learning which deletes joy, creativity and engagement from the process. For example, I teach GCSE media studies. I recently asked four year ten classes to tell me what they knew of the slave triangle. I’d checked that they had covered this before in history. The point was to understand how African music had reached North America. Nobody could tell me, not even the brighter kids. When I pushed them with clues they gradually volunteered something about ‘crossing the Atlantic in crowded ships’. ‘Why don’t you know this?’, I roared in frustration. ‘Because we did it in year nine,’ was the unified but meek reply. These kids had learnt not that slavery is an abomination of human rights, but that it’s something you do–or gets done to you–in year nine.

It’s also well documented that secondary school kids have difficulty transferring the same skills from one subject to another, for example pie charts, map reading, empathy role-plays. This is the Sats-bred culture of hurdle jumping and mere survival, nothing to do with learning or understanding, never mind using knowledge experimentally, critically or creatively. In an article, ‘What the Biology of the Brain Tells us about Learning’, the journal Educational Leadership describes this as ‘putting children with biologically shaped brains into machine-oriented schools. The two just don’t mix. We bog the school down with a curriculum that is not biologically feasible.’ So education should be a universal right, not a privilege for the few, and this right should be unconditional.

This leads us to the other Blairite bluff, more specific and pernicious than the first, that education is the key to Britain’s economic advance. In a key pre-election speech on 8 February 2001 Tony Blair insisted that, ‘Today the economic and the social in politics go together. Human capital is the key to economic advancement in the knowledge economy.’ Our brains have become the ‘hands’ of a previous industrial age, a replacement for the physical attribute most crucial in labouring to produce profit. And profit, apparently, is most abundant in the ‘knowledge economy’.

Nevertheless, Blair went on to outline much that has just become law, extolling more faith-based and specialist secondary schools and city academies–schools bought out or set up by private or voluntary bodies, which remain in their control despite annual state funding–and powers for schools to join together, to ‘innovate’, and to opt out of national pay and curriculum requirements.

Now Estelle Morris reminds us, ‘Education is the number one priority for the government. Our future as a prosperous and civilised nation depends on getting it right.’ But one of the scandals of the first Thatcher government was the abandonment by most manufacturing industries of their apprentice schemes in return for what Norman Tebbit promised them would be the flowering of Technical and Vocational Educational Initiatives (TVEI) in schools. TVEI has gone the way of so many damp squibs, but millions of pounds were saved by private business while the expectations of schools to deliver factory-ready employees were ratcheted even higher.

I also doubt whether Estelle Morris has come across Alison Wolf’s excellent demolition of the education for economic growth doctrine in the book ‘Does Education Matter?’ By analogy to Stalinist planning she characterises our schools precisely: ‘In a centrally funded, target driven, top-down organisation, the main and inevitable concern of lower level functionaries is the satisfaction of their paymasters.’ Far from challenging the private sector to reinstate their contribution to training costs, Labour is keener to let them either run schools and LEAs or devote increasing amounts of 14-plus curriculum time to work-related training.

We must stop apologising for the deficiencies of the comprehensive system. While the ideal of a publicly funded, non selective, preferably secular school system needs confirming over and over again, the material reality is increasingly far short of that vision, especially post-primary. A Labour Party commitment in its 1964 election manifesto to provide ‘a grammar education for all’ was followed by a circular to local authorities suggesting changes in the delivery of public education. But there was no legislation to do away with grammar, church or private schools. Indeed, Blair’s is the first Labour government to pass any education bill. Thwarted from doing so by defeat in 1970, Labour watched as the Tories presided over the radical reorganisation of local government in the early 1970s with Margaret Thatcher as education minister.

Although GCSE and A-level grades nudge up every August and most parents are still hostile to selection, spending in education will only reach the European average level by 2006. Average, as school workers are constantly told, is not good enough–so why is it good enough for Gordon Brown?

The strings attached to even that new funding will include more teaching assistants in charge of learning, more kids sat in front of computers, and more selection, specialisation and privatisation. Even worse, although more risky in terms of industrial relations, Estelle Morris wrote to the school teachers’ pay review body on 31 July asking that from April 2003 all teachers’ pay should be linked to stricter annual performance criteria, including pupil behaviour as well as exam and Sats grades. She also wants to scrap London allowance payments, in favour of ‘loyalty’ bonuses targeted at individual schools.

She lists the ways in which the next three years’ vision will ‘mark a decisive break with the old comprehensive system’. Her detail is actually both a misrepresentation of the past and an overestimation of the possible future changes.

Just as CIA renegade Philip Agee revealed you could tell one of their front organisations if it contained the word ‘freedom’ in its title, the word ‘reform’ has had its progressive connotation completely inverted under Blair. ‘Reforms’ are now something for workers to dread. Other buzzwords like ‘diversity’ and ‘excellence’ are likewise redefined, to mean something more like ‘chaos’ and ‘atrophy’. In the absence of protest these will be the final nails in the coffin of secondary comprehensive provision.

Apart from economic issues, the really tantalising question is whether parents and school workers can unite to defeat Sats. They are the cornerstone of the market in education, providing the crude currency by which league tables are compiled, which in turn determine school numbers, the budget and staffing. There is every prospect that the NUT will vote to boycott them at next Easter’s conference. Before then we need to agitate with the increasingly worried number of parents who see their young children turned into nervous wrecks by Sats mock exams, Sats revision clubs, and Sats themselves. A government defeat on this would be a huge victory for us. 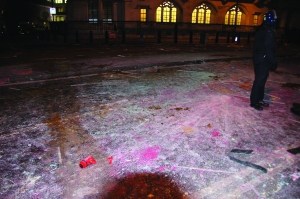