This article is over 17 years, 3 months old
More people than ever before are planning to vote by post in the general election - but how secure are postal votes?
By Tom Wall
Downloading PDF. Please wait...
Sunday 01 May 2005

In the key battleground of Bethnal Green and Bow, where George Galloway is taking on Oona King MP, 5,050 people (at the time of writing) are registered to vote by post compared with 494 at the last general election. This figure is likely to increase further, as voters have until the end of April to register. The election office told me that they are working round the clock processing applications. The neighbouring constituency of Poplar and Canning Town has seen a similar expansion of postal voting: from 1,537 in 2001 to 4,111. Indeed it has grown almost everywhere, but particularly in the inner cities. A survey of 135 constituencies by the Guardian found postal voting had tripled in some urban areas.

All this should serve as confirmation of the government’s efforts to re-engage with disaffected voters. Instead ministers are desperate to avoid the subject because a series of high profile court cases have exposed a system open to abuse and electoral fraud on a scale not seen in this country since the 19th century.

In April a high court judge in a special electoral court (the first for more than a century) described postal voting on demand as ‘an open invitation to fraud’ after uncovering ‘massive, systematic and organised fraud’ in two wards in Birmingham. Richard Mawrey QC, sitting as an election commissioner, upheld allegations of postal voting fraud in Bordesley Green and Aston. He ordered the elections to be rerun and disqualified six Labour councillors from standing again.

During the four-week trial Mawrey heard how thousands of ballot papers were stolen, altered and acquired by deception. One particular incident stands out: two days before the election the police were called to an industrial estate where they discovered three Labour councillors in an upstairs room. On a table were piles of unsealed ballot papers. Some had been taken from letter boxes and others from postal workers. Some had even been altered with correction fluid.

Soon after Mawrey delivered his judgement another Labour councillor, in a separate case, was jailed for three and a half years for rigging postal votes. Muhammed Hussain, from Blackburn, pleaded guilty to conspiring to defraud local electors in May 2002. Hussain had arranged for campaigners to ask voters to hand over blank postal voting papers, telling them, ‘Don’t worry, we’ll take care of them.’

The police are currently investigating allegations of postal voting fraud in Cheshire, Derbyshire, Greater Manchester, West Yorkshire and Surrey. The Crown Prosecution Service says there are 39 ongoing investigations into electoral fraud. However, it is hard to have much faith in the police. In Birmingham the cops who discovered the vote-rigging factory delivered the doctored ballot papers to the election office where they were duly processed. The judge described it as surreal and berated the police.

Postal voting on demand was introduced in 2001 as part of a raft of largely cosmetic measures to tackle voter apathy. In the past voters had to give a good reason like illness, disability or absence to vote by post. It was claimed it would make voting easier and reverse the fall in turnout, but it did not address the reasons behind voter apathy, or perhaps more accurately abstention. The government piloted it in a few local elections and heralded it as a success despite reservations by the Electoral Commission and the Electoral Reform Society. Now for the first time anybody can apply for a postal ballot in a general election. The Electoral Commission estimates that up to 6 million of the 44 million people entitled to vote will have postal ballots and in some places they could be decisive.

The system is open to abuse because ballots can be stolen from letter boxes or postal workers; voters can be impersonated as signatures are not systematically checked. But perhaps most alarmingly, it is legal for political parties to collect ballot papers. This gives potential fraudsters the perfect opportunity to either pressurise voters or alter ballots.

Bethnal Green and Bow is particularly vulnerable. Like Birmingham it has a large Muslim population who are angry about the invasion of Iraq. Like Birmingham the Labour Party are facing a strong electoral challenge. As the judge in the Birmingham case noted, ‘It was the Iraq war which turned many Muslim Labour supporters away from voting Labour, in some cases towards voting for the Liberal Democrats or other parties who opposed the war, such as the People’s Justice Party. The principal purpose of the campaign of electoral fraud waged by the Labour Party was to target precisely those formerly safe Labour wards with large Muslim populations where the fraud would redress the balance.’

Already it has emerged that Oona King has been urging voters to fill out postal voting applications forms and return them to the Labour Party. This flouts advice given by the Electoral Commission and the Association of Chief Police Officers calling on political parties to steer clear of involvement in postal voting in the wake of the Birmingham judgement. ‘It should in preference go direct to the electoral registration office rather than to an intermediary address,’ said a spokeswoman for the Electoral Commission. ‘It’s about making sure there isn’t a perception of mishandling and malpractice. Also last year one of the key problems was that application forms were being stored and not going to the local registration office as quickly as possible. In some cases people were disappointed because they thought they had filled in a postal application form and it didn’t arrive.’

A spokeswoman for Oona King said the applications would be passed on unaltered within two days and denied they were ignoring the advice given by the Electoral Commission: ‘The guidelines only say the election office should be the preferred address. The very use of the word preferred makes it clear there can be another address.’

George Galloway has written to the Electoral Commission and returning officers in Tower Hamlets, Newham and Birmingham calling for the suspension of postal voting in the general election. 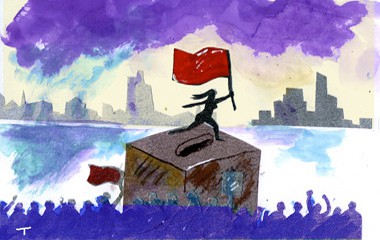 The crisis in mainstream politics presents a challenge for the left

Red Light from the Greens