Eurozone on the brink of collapse?

This article is over 10 years, 3 months old
The global economy is entering "a dangerous new phase", said the International Monetary Fund before its annual meeting last month. The same can be said for the European Union (EU) and the eurozone.
By Peter Dwyer
Downloading PDF. Please wait...
Saturday 01 October 2011

At the centre of all the press talk of a capitalist crisis (and this is the phrase increasingly used by papers such as the Financial Times) lies a crisis of the eurozone – the EU economy is bigger than that of the US.

Essentially the debate that haunts EU leaders is similar to the one taking place in the UK. How do they get out of the crisis or in their words, how do they reduce national debt? The two arguments (which both assume the working class should pay for the crisis) are this – should national debt be reduced through the austerity measures (cutbacks in public spending and tax increases) or through increased state spending to create jobs and generate tax revenue to help pay down the debt.

At present the former is what most governments are pursuing. It is here that Greece is central.

At one level it shows what happens if you continue to use austerity measures in spite of the mounting evidence that they don’t work. Slashing public sector employment and incomes leads to a worsening of the deficit, as tax revenues fall and the state welfare bill rises.

The Greek economy has been in recession for four years and economic growth is set to shrink by a further 5 percent. Unemployment is at 16 percent and is expected to continue to rise in 2012. In addition to the measures already attempted, if Greece wants to get more money to help pay its wages and other government commitments (interest payments to German, French and US banks) they have been told to sack 30,000 workers hired since 2010 and pay public sector workers only 60 percent of their salary.

Enter the Greek working class. It has been their defiance of such measures through general strikes, protests and riots that has meant the Greek rulers have been prevented from going as deep and as fast as the EU want them to. The result has sent shockwaves through the EU for fear they will not get their money back if Greece defaults.

What will happen if Greece defaults and leaves the eurozone? We don’t know for sure but many fear contagion (the spread of economic panic) would be inevitable. There could well be a run on banks across the EU and due to the global interconnections of economies and banks (one outcome of globalisation) this would undoubtedly deepen the economic crisis, could result in Germany pulling out of the euro and threaten the break up of the EU.

But what is the answer? A major political problem that plagues the eurozone is there is no one single European fiscal authority that manages the budget. The introduction of a single European currency left monetary policy (setting interest rates and controlling the amount of money in circulation) to be decided centrally and fiscal policy (government expenditure and taxation) to be decided nationally.

Effectively the EU has not one treasury led by a chancellor of the exchequer but 17 (the number of members using the euro). The eurozone crisis is worsened by the tendency to retreat into economic nationalism among EU states. Some European leaders are therefore calling for the EU to create a centralised fiscal authority (one big EU treasury department) to manage the EU economy. The setting up of the Eurozone Financial Stability Facility suggests that this has already begun.

The EU has prevailed by carefully managing conflicts in the past that have blighted it since its creation in 1958. Whether it can continue to do so is seriously being questioned. The economic crisis continues to feed into a political crisis that is having serious ramifications. Some have lamented that this has only benefited the right.

However, last month left of centre parties were elected in Denmark and Latvia. In Germany, Chancellor Angela Merkel faces mounting political pressure. In elections for Berlin’s city parliament last September, Merkel’s junior ruling coalition partners, the right wing Free Democrats, slumped to 1.8 percent of the vote. With a resurgent Social Democratic Party the ruling coalition is now under threat – a timely reminder to those who talked of the irrelevance of the left at the start of the crisis.

So what next? As Socialist Review went to press Martin Wolf of the Financial Times summed up the situation well: “The eurozone then cannot stay where it is, cannot undo what it has done and finds it traumatic to go forward.” This is political paralysis by any measure. But we know capitalism never stands still.

While the economic and political crisis of the European capitalism continues, the outcome of it is not determined. The recent election victories for the Left and unrest on the streets of Europe testify to this. This is why it is all the more important that we build support for any action against cuts and go all out to build the biggest possible turnout for the mass strikes on 30 November. 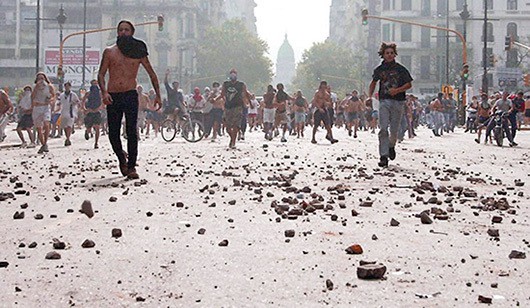 Argentina's 2001 crisis: The lessons for Greece

Leap of faith: The ruling classes' "solution" to the economic crisis