Set in rural Armagh in 1981, against the backdrop of the IRA hunger strikes, The Ferryman centres on the Carney family as they prepare for the harvest.

Quinn Carney (Paddy Considine), once but no longer active in the IRA, and his wife Mary (Genevieve O’Reilly) have seven children. They share their home with Quinn’s uncle, Patrick, and his two aunts, Patricia and Maggie, or as the children call her, “Aunt Maggie Faraway”. This is because she appears to suffer from dementia, but every so often recovers herself sufficiently to tell them stories. These are mostly about the past, but as the play goes on, they seem to foreshadow the future.

The other members of the household are Caitlín, wife of Quinn’s brother Seamus, and their son, Oisín. Seamus was recruited into the IRA by his brother Quinn, but has been missing for many years. No one knew where he had gone until tonight, when the local priest, Father Horrigan, arrives with news of Seamus. Another character is Tom Kettle — a gentle Englishman who has somehow ended up in the locality, and who, in a reversal of the usual national stereotypes, does odd-jobs for the Carneys.

The foremost aspect of the play is playwright Jez Butterworth’s lyrical script, in which he inserts both popular music and rebel songs to set the present against the past. Indeed, the invocation of the past, and for that matter those who have passed, is central to the story. Maggie is key here, but also important is Uncle Pat, who seems to be a kind of Armagh version of the poet Seamus Heaney, complete with classical Greek allusions. Caitlín and Quinn are both trying to escape what has gone before, but their attempts to do so seem doomed.

Butterworth’s setting, and his exploration of the historical context for the action, are good reasons to see the play. Anyone seeing it will be left in no doubt why Irishmen (and women) joined the IRA and waged war against the British state. As such it is a more than welcome addition to the not-very-long list of British plays about Ireland. But the specific atrocities it references, and the story it tells, especially the ending, might make it more likely to appeal to mainstream critics in Britain. It is, though, a very good play. 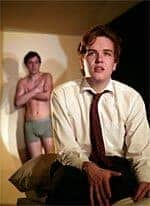