This article is over 20 years, 3 months old
The deadly arms trade between Britain, the US and Israel
By Solomon Hughes
Downloading PDF. Please wait...
Wednesday 01 May 2002

Colin Powell effectively went on his ‘peace mission’ to Israel with a suitcase of guns. Every US call for Israeli restraint is matched by millions of dollars in military aid and huge consignments of US arms. It’s not the Jewish-US lobby driving this support for Israel, but those old Texas issues of guns and oil. A well armed Israel can better keep the ‘balance of power’ in the Middle East, ensuring cheap flowing oil. The arms sales keep up the share prices of Lockheed, Raytheon, Boeing and Textron. Britain hangs on to the coat tails of US policy and also arms to Israel. The recent Foreign Office announcement of an ‘unofficial’ arms embargo on Israel is in itself wholly inadequate, but does show the pressure Jack Straw is under.

The US gives Israel over $1.9 billion ‘Foreign Military Financing’ (FMF) each year. This grant officially ‘enables selected friendly and allied countries to improve their ability to defend themselves by financing their acquisition of US military articles, services, and training’, but Israel is also allowed to use the cash to subsidise its own arms industry. US arms are central to Israel’s arsenal and its killing in the Occupied Territories. On the back of its US-backed military might, Israel has built its own healthy arms industry. It is the eleventh largest importer and the twelfth largest exporter of arms.

According to the latest Foreign Office report, British exports in 1999 stood at £11.5 million worth of weapons to Israel. In 1982 Thatcher’s government imposed an embargo on all arms sales because of the Israeli invasion of Lebanon. The arms embargo was lifted as part of the ‘peace process’–on the basis that nothing encourages peace so much as the sudden arrival of weapons of war. As the situation deteriorates into a re-run of the 1980s, Cook, Hain and Straw–once critics of Thatcher’s love of the arms industry–have been reluctant to act as firmly as their Tory predecessors and reimpose an embargo. Britain allows exports of parts for combat aircraft, armoured fighting vehicles, bombs, combat helicopters, general purpose machine guns, heavy gun and small arms ammunition. Britain also specialises in helping armies find their targets, and has licensed parts for surveillance systems, night sights, range finders and weapons sights, all of which will help the Israeli Defence Force pick out and kill Palestinians. There is an ‘open’ licence for armoured cars, allowing these to be exported to Israel at any time.

Up to March the Foreign Office confidently claimed that British weapons were not used in the Occupied Territories because, as Robin Cook told the Foreign Affairs Select Committee, ‘we actually do have no evidence that equipment produced in the UK has been used in this way’. However, disgust among Labour supporters over the government’s attidue to arms and Israel has spread to the backbenches. The vacuity of these reassurances has been chipped away by Dr Phyllis Starkey. Once a loyal Blairite, Starkey has confronted Cook, Hain and Straw with a series of questions on the issue. The reason the Foreign Office had no evidence that Israel used British-made weapons against the Palestinians is that it didn’t seek any evidence. Starkey asked Cook, ‘How are British officials on the ground, as was stated by Peter Hain, actively checking whether any British-made equipment or components are being used in the Occupied Territories? Is anybody standing beneath planes and trying to spot which ones have our bits in and which ones have not?’ A shamefaced Cook was forced to admit that Britain’s only method was relying on the ‘defence attaché’s close interest in what is occurring in the occupied territories’. Apparently the defence attaché’s close interest did not extend to listening to Radio 4, which interviewed an anonymous senior Israeli defence ministry official who revealed that British transit vans, Land Rovers and helicopter components were used against the Palestinians.

The government also announced there was no problem because Israel promised not to use our arms. Cook proudly told MPs he had a letter from the Israeli government saying, ‘I hereby certify that no UK-originated equipment nor any UK-originated systems, subsystems or components are used as part of the Israeli Defence Forces (IDF) activities in the territories.’ This March, Roger Bevy MP asked Straw, ‘Do the Israelis in the Occupied Territories say, “Well, hang on, we had better put those UK-manufactured machine guns down and pick up someone else’s machine guns”?’ Straw’s response was that we could trust the Israelis because in general ‘governments do not break those undertakings’. In May an embarrassed Straw admitted that British weapons were being used. The defence attaché finally noticed that Israel’s Puma armoured personnel carriers, built out of old British Centurion tanks sold in the 1960s and 1970s, were at work. Conveniently, he failed to notice the use of more recent British helicopter and gun parts. This admission led to an ‘informal’ ban on the sale of arms. The Foreign Office claims it will no longer license arms used for ‘internal repression’ to be sold, although its failure to recognise the existing use of British arms suggests the embargo will be at best weak.

Labour wants to sell the weapons for money and influence. Ten days before Ariel Sharon visited the Temple Mount and ended the ‘peace process’, the Society of British Aerospace Companies (SBAC) organised a visit of 15 arms firms to Israel. The trip was backed by the British embassy, the DTI and DESO, the government’s arms sales agency, and involved ‘high level networking events’ with Israel’s military and a lunch sponsored by British Aerospace. SBAC has ‘prioritised Israel as a key market for the UK aerospace industry’. Defending arms sales to Israel to MPs, Robin Cook said he wanted to avoid the ‘blame game’ and sell arms, because this would help Britain ‘retain a locus’ with Israel. 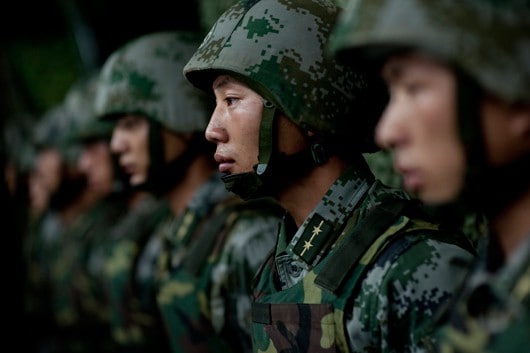 China, the US and imperialism