This year’s London Jazz Festival will see it go from strength to strength. Held in a number of venues big and small, with some gigs free, it truly has a stellar lineup and includes several artists who have been interviewed in Socialist Review (date of interview is in brackets).

Some of the highlights include Herbie Hancock, Brad Mehldau, Denys Baptiste, Terence Blanchard Band and Robert Glasper Trio, Courtney Pine and Christian Scott, Soweto Kinch and Sonny Rollins. Also check out some of the smaller gigs – it’s often where the more interesting music is made.

Fritz Lang’s 1927 pioneering masterpiece is out in its original uncut format for the first time on DVD. If you missed it on the big screen this is the next best thing. For all its political naivety, Metropolis illustrates the class system of a dystopian future in a way which has influenced cinema and haunted audiences for 80 years. This is compulsory viewing for cinephiles and recommended viewing for socialists.

The Girl who Kicked the Hornets’ Nest, 25 November

This final instalment of the film adaptations of Stieg Larsson’s Millennium series of books is out this month and worth a look.

Lizbeth Salander, arguably one of the coolest heroes of recent popular fiction, is in all sorts of trouble with the state, the media and organised crime. With the help of intrepid journalist Mikael Blomkvist, she fights to clear her name and live to tell the tale.

After reading the books and watching the films, Millennium junkies have the opportunity to watch them all again – a Hollywood remake starring Daniel Craig is due in late 2011.

Pinter’s Progress and the Homecoming, DVD

Experimental theatre company Complicité return to the Barbican this month. Their latest work, Shun-Kin, is a story about a blind player of a shamisen (a three-stringed instrument) and her devoted servant.

Performed by a Japanese cast this promises to be a haunting exploration of beauty and violence. 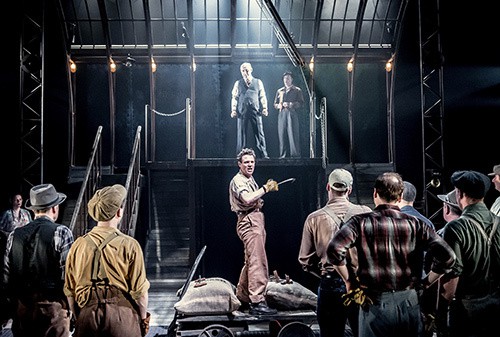 The Hook: a real contender

Resistance is funereal in South Wales