This song has become a hit on the mass demonstrations in France. After four days of national strikes and weekly demonstrations since 7 September the government has still not caved in. In just the last four days of action more than 3 million protesters have taken to the streets across the country. As the law to increase the retirement age was about to be passed in the Senate the unions called two new days of strikes and protests.

This movement has already inflicted a political defeat on Nicolas Sarkozy that has scared employers and restored confidence to millions of workers. At the beginning of September the mood among the key union militants was that we couldn’t win, but we must fight – for our own dignity.

Two factors changed that. First, the government gave no room for negotiation with even the most moderate union leaders – pushing them into action. Second, the bank bailouts and corruption scandals which exploded in the summer created a climate of anger against those in power.

Each day of action has seen the numbers involved increase. In early October 3 million demonstrated, which really changed the atmosphere, and the objective became the withdrawal of the bill. In Marseille struggles on specific issues in sectors as diverse as the docks, school canteens and Monoprix supermarkets came together in September around the fight to defend pensions. Marseille has become the symbol of the struggle and of what is possible.

When the government refused to budge, workers decided to intensify pressure and called for rolling strikes. Significant minorities in sectors such as transport, chemicals and local councils have taken this kind of strike action. The oil workers then entered the fray in an audacious manner, blockading their refineries. The blockade tactic has also been taken up by lorry drivers and school students.

Alarmed by the mobilisation of “uncontrollable” students, and their possible influence on the wider movement, the government chose a repressive response. The police injured three school students on their first day of action. This prompted an immediate escalation of action in the schools.

As I write, we are at a crossroads. The authorities are attempting a crackdown, in the hope of breaking the momentum of the movement. In the face of state repression, new blockades are being organised. By making appeals to “democracy” to justify strike-breaking by the police the government has turned a social crisis into a political one.

The New Anticapitalist Party (NPA) has argued from the start about the importance of building and broadening the movement from the grassroots, and about the nature of our confrontation with state power. We are rapidly gaining an audience.

Denis Godard is an NPA member based in Paris. 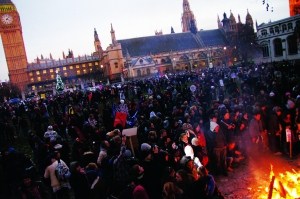 It is important to vote

Spring in our step