This article is over 10 years, 1 months old
The results of the first round of the French presidential elections on 22 April were another sign of the deep political turmoil which sometimes bursts into open struggle and sometimes simmers just under the surface across the whole of Europe. They are a signal of momentous battles to come.
By Charlie Kimber
Downloading PDF. Please wait...
Tuesday 01 May 2012

The Socialist Party’s François Hollande topped the poll, just ahead of right wing President Nicolas Sarkozy. It is the first time ever that a sitting president has lost in the first round.

The rejection of Sarkozy is welcome. But the biggest winner at the polls was Marine Le Pen for the fascist National Front (FN). She grasped nearly 6.5 million votes, 17.9 percent of the poll.

As an absolute number of votes this is a new high, more than her father Jean-Marie Le Pen took when he infamously won through to the second round of the voting as one of the top two candidates in 2002. Indeed, it’s more in votes than he won in the second round.

As a percentage it is more than Le Pen won in 2002, although less than the two fascist candidates combined took in that year.

Marine Le Pen’s vote is appalling confirmation that the repeated political concessions to her views by the French political establishment have fuelled the fascists rather than exhausting them.

The National Front has fattened from the disenchantment with the main parties and by offering fake solutions to the problems that hard-hit workers face. Le Pen pretends to care about honest French workers while actually delivering for the rich.

For years the major parties have allowed Le Pen to set the agenda and they accepted key elements of her policy. It strengthened her.

Since he was elected in 2007 Sarkozy has used racism against Muslims and Roma plus scapegoating of immigrants and the unemployed in order to force through his policies for the rich and to divide opposition to him.

In these elections he began his campaign with talk of “too many immigrants” and went on to launch disgusting “scares” about the prevalence of halal meat.

As they scrambled for votes in the second round (scheduled for 6 May), both the candidates continued their concessions to Le Pen. Sarkozy said, “I hold nothing against National Front voters. I say to them, ‘I’ve heard you.’ The French don’t want to be dispossessed of their way of life. That’s the message I heard.”

Pierre Moscovici, campaign director for Hollande, said, “We must fight with absolute firmness, without concession, against illegal immigration.”

Rise of Mélenchon
But Le Pen is not the only powerful force. The election was also lit up by Jean-Luc Mélenchon, whose campaign inspired workers and young people across France.

Mélenchon stood for the Left Front, an alliance of his own Left Party (a split from the Socialist Party) and the Communist Party.

At a series of mass rallies people responded to his aggressive assaults on the bosses, and his calls for a “citizens’ revolution” and a “sixth republic” of economic, ecological and social justice. His programme included a 20 percent increase in the minimum wage to £1,500 a month, a 100 percent tax on income over £300,000 a year, an immediate return to the 35-hour working week, retirement at 60 on the full pension (at least 75 percent of final earnings) and the nationalisation of banks and energy firms. He called for France to leave Nato and denounced the US as the biggest threat to world peace.

Mélenchon also attacked the weakness of the Socialist Party, deriding Hollande as “Hollandreou”, thereby suggesting that he would tread the same path of submission to the bankers as Greece’s Papandreou.

Significantly (and importantly for the future) Mélenchon attacked Le Pen hard and denounced Islamophobia. At one rally he said, “Don’t yield to the party of hatred that calls on you to divide yourself from others. Don’t allow yourself to be divided according to your religion or skin colour.” This was a welcome move given that the law to ban the niqab veil was originally put forward by André Gerin, a Communist Party member.

The combined vote of the Left Front, the New Anticapitalist Party (NPA) and Workers’ Struggle (LO) was 12.8 percent. This is a considerable improvement on 2007’s 7.34 percent for the main forces to the left of the Socialist Party. Mélenchon did not simply unify the pre-existing left vote; he built it. Of course the development of the crisis and the mass strikes against pensions in 2010 could have seen a bigger left vote anyway than in 2007.

But in December polls showed Mélenchon winning just 6 percent of the vote. He had doubled that four months later through his campaign.

In 2002 the combined total for the Communists, the LCR (the forerunner of the NPA) and LO was 13.37 percent – and 10 percent was made up of votes for the parties to the left of the Communists. However, the actual number of votes was lower because the turnout was not as high as 2012’s 80 percent.

While we should recognise Mélenchon’s achievement, it is regrettable that the NPA’s vote fell from 4.08 percent last time to 1.15 percent in 2012. This reflects a crisis inside the party and its inability to connect with those who want resistance as it had done so successfully in earlier presidential elections.

It remains to be seen if at least some of Mélenchon’s supporters are drawn towards the lure of office if Hollande becomes president, or what alliances will emerge around the parliamentary elections in June. The danger is that Mélenchon’s campaign is channelled into winning MPs and loyally pressuring the Socialist Party. That’s not nearly enough.

Hollande’s programme was well to the left of anything we are likely to hear from Ed Miliband. He called, for example, for a 75 percent tax on anyone who makes more than €1 million (£800,000) a year. And Mélenchon’s campaign pushed him slightly further to the left on occasions. This was enough to panic some financiers.

But both Sarkozy and Hollande plan massive cuts. Both have promised to eliminate the budget deficit by implementing some £80 billion of tax rises and spending cuts. The only difference is that Hollande will close the deficit by 2017 rather than Sarkozy’s 2016 and favours a package slightly more weighted to tax rises rather than cuts.

Those candidates who stood to the left of Hollande called on their supporters to vote for him after the election. At his post-election rally in the Place Stalingrad, Mélenchon said, “I call on you to meet again on 6 May, without demanding anything in exchange, to beat Sarkozy” he cried. “I ask you to mobilise yourselves as if it was a case of making me president.”

But that didn’t go down well with all of his audience. “I will almost certainly tear up my voting slip in the run-off vote,” Isabel Nicolas, a teacher, told France 24. “If I vote for Hollande I might as well vote for Sarkozy because there is no difference between them. They both want to solve the financial crisis through austerity.”

Others rightly put their support in the context of not trusting Hollande. NPA candidate Philippe Poutou said, “We say it clearly, we must clear out Sarkozy and his gang by voting against him. But that does not mean any support for Francois Hollande’s politics.”

In 1981 the Socialist Party’s François Mitterrand was elected president. For a year there were some reforms and then, as the bosses revolted at further change, the reforms abruptly stopped. Mitterrand’s government slashed public spending and froze wages while unemployment soared. The result was anger, bitterness and disillusion – a breeding ground for the National Front.

This time the Socialists will not have a year of grace. The crisis is too deep, the bosses and bankers demands too clamorous.

Whoever wins on 6 May, stormy struggles lie ahead. The battle on the streets was set to start on 1 May with marches called by Sarkozy, and Le Pen as well as the left.

French politics is polarising fast. The left needs to focus on building and strengthening the fightback in the workplaces and on the streets. And it must systematically challenge the myths peddled by the Islamophobes and the fascists.

The mainstream media always lurch between two errors concerning Le Pen. Either the fascists are irrelevant or they are on the verge of power. Neither is true.

As an article by Hendrik Dravi points out, “As the turnout was higher [in 2012 than 2002] the number of FN votes is higher and we can only be concerned about this result. But it masks profound changes. Indeed, the FN declined sharply in major cities and working class suburbs where it was often behind the Left Front.”

The Left Front beat the National Front in Paris, Lyon, Lille, Bordeaux, Toulouse, Montpelier, Nancy, Rennes, Nantes, and Clermont-Ferrand (see box). This is no cause for complacency (look at the figures for Marseille, Toulon and Nice, for example). But it does show that in many urban areas the votes to the left of the main parties are stronger than the Nazis.

Resistance to austerity, principled opposition to racism and socialist solutions to the crisis can forge a movement that can defeat Le Pen and draw away at least some of her supporters.

FN: A warning from France 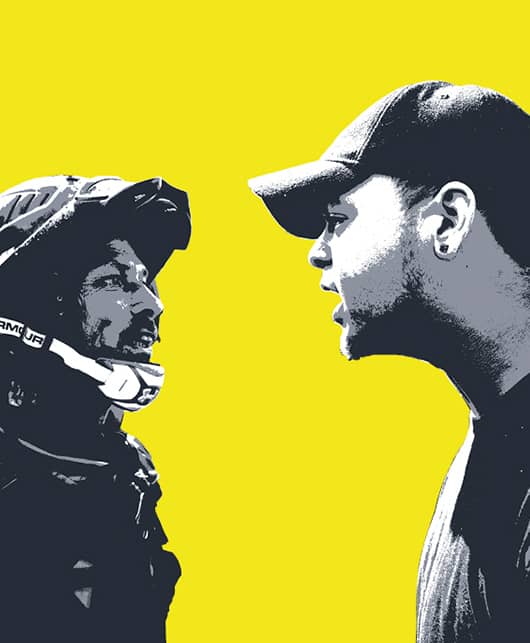 Trump, the alt-right and fascism in the US

F is for Fascism