The Free State of Jones

This film is quite unlike other recent movies about the American Civil War. It’s not about heroes and victims. It’s the true-life story of poor whites and black slaves coming together to fight a common enemy: the Southern plantocracy.

The film opens with Confederate soldiers being mown down by Union troops. The pointless death of his terrified young press-ganged nephew spurs Newt Knighton (Matthew McConaughey) to desert the Southern army. So do many others, as the Confederate generals demand economic sacrifices to pursue the war they are losing.

But those with slaves are exempt from requisitioning; those without — the poor white farmers — are made destitute and forced out of their homes.

Many join Newt in the inaccessible swamp inhabited by runaway slaves where he takes refuge. The war to defend slavery is also a war to defend the economic privileges of the white rulers. The poor whites come to realise that it is in their own interests to support the black slaves and fight together.

Eventually they win their class war against the Confederacy and create a “state” in which economic equality is the bedrock of social equality. All this is depicted impressively in the film. Newt is not the liberating hero à la Lincoln, but a leader whose strength comes from the conscious, collective resistance that he inspires.

What is even more brilliantly portrayed is what happens after the defeat of the Confederacy. In one striking scene, a former slave owning plantocrat swears allegiance to the victorious Union and is left in full possession of his property.

Everything changes so that everything can remain the same: black people are forced to work in exactly the same terrible conditions as when they were slaves.

There was the brief moment of Reconstruction — when freed black citizens were encouraged to exercise their rights. But the Ku Klux Klan put paid to that and the Union abandoned those it claimed to have liberated. In reality, the North had no interest in upsetting class relations even if it had to end slavery.

The free, non-racial state of Jones did not survive — but Newt, and his family by the black former slave he lived with, did. His defiance of the colour bar is echoed in a strand of the film that jumps forward to 1948, the year in which one of his grandchildren (one eighth black) was prosecuted by the state of Mississippi for marrying a white woman.

The film reminds us of a forgotten, perhaps deliberately buried, history of resistance to slavery among poor white people in the Deep South. Few mainstream films deal with race. Even fewer with class. Uniquely, perhaps, this film shows that only class can effectively challenge racial division. 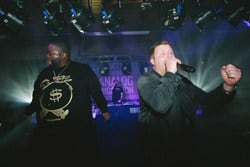 On a Collision Course

Everything is Not What it Seems