This article is over 10 years, 8 months old
The depth of the devastation of ordinary American lives means that the divisions between workers and protesters that existed in the 1960s have collapsed, writes Megan Trudell
By Megan Trudell
Downloading PDF. Please wait...
Thursday 01 December 2011

It could be argued that it’s been a long time coming. For 30 years, US capitalism’s answer to falling rates of profitability has been to restructure – cutting manufacturing jobs, relocating operations from former industrial heartlands to the much more weakly unionised South and West, intensifying work processes, deregulating industry, privatising services and extending working hours while chipping away at wages and holiday and sickness benefits.

Concessions
Too often unions have cooperated in the restoration of profitability, and the subsequent pattern of concessions, give-backs and “shared sacrifices” has enabled US business to transform productive operations to the detriment of the working class and the disorientation of its leadership. The rate of exploitation has been ruthlessly ratcheted up. These methods, and the suppression of resistance that was the union side of the bargain, have been part of a process that has dramatically increased inequality in the US.

There has been a massive redistribution of wealth from the poor to the rich. Between 1979 and 2007 the incomes of the top 1 percent grew by an average of 275 percent, while those of the vast majority barely changed. In 2010, the typical US household income was much the same as in 1989.

The recession has accelerated those trends. Increasing numbers of Americans are being forced into poverty, job insecurity, homelessness and debt.

A staggering number of people who are not technically poor are just hanging on, living paycheck to paycheck and struggling with childcare costs, loans, mortgages and car payments. Between 2007 and 2010, family income for the bottom 20 percent fell by 11.3 percent and $6000 a year has been wiped off median household incomes in the last decade.

At the same time, throughout the period since 2008, productivity has continued to rise – the wealthy are clawing back profitability by squeezing workers yet further. According to the US Bureau of Labor Statistics during the third quarter of 2011 productivity increased at an annual rate of 3.1 percent.

One in six Americans – 49 million people – are officially living in poverty. This includes 22 percent of all children under 18 and a third of all single-parent families headed by women. The paucity of the US welfare safety net means that millions also lack all health insurance and one in four working age adults and almost 10 percent of children under 18 have no medical coverage.

Just over 45 million people receive government food aid from the Supplemental Nutritional Assistance Program. To be eligible, income must be less than $27,560 (£17,284) for a family of four. This has risen by a third since July 2009 – when the recession was officially over!

Unemployment in the US has been running at or above 9 percent for two and a half years, but the official figures exclude those who work part-time but want full-time jobs, and those who have given up looking for work. Using a broader measure that includes those only marginally attached to the labour market and those discouraged from job-hunting, the unemployment rate rises to 16.5 percent.

The number of long-term unemployed is unprecedented in the post-war period. The numbers of those out of work for a year or more rose from 645,000 in 2007 to 4.5 million by mid-2010. Over 6 million Americans, more than 40 percent of all those unemployed, have now been out of work for more than six months. No wonder 1 million Americans lost their homes in 2010, and a further 1.2 million are forecast to lose them in 2011.

These statistics translate to a terrible and constant strain on workers and their families, something Obama’s administration has utterly failed to address. It is important to grasp the extent to which disillusion with Obama has fed into the current protests – millions, especially young people, had enormous expectations of a transformation of the priorities of the system. Idealistic such aspirations may have been, but Obama’s betrayal of them has seen collective action and grassroots democracy replace passivity for many.

The same tensions of class polarisation, inequality and instability that were expressed in distorted and contradictory fashion by the Tea Party have now found collective expression in resistance towards many of those elected on right wing platforms.

Crucially, in February this year in Madison, the capital of Wisconsin, a working class movement from below broke through and for three weeks mass protests of teachers, students and public sector workers escalated to the occupation of the state government building, turning it into a liberated zone with constant meetings and debates and several 100,000-strong rallies. It was a tremendous show of defiance and strength in the face of the proposed cuts and attacks on union rights by Tea Party governor Scott Walker.

Back on the agenda
Although the Wisconsin uprising went down to defeat it put mass working class protest firmly on the agenda in a way not seen in decades. And that force, its creativity, spontaneity and organising power, has fed into the Occupy movement which is in turn reinvigorating some unions and encouraging practical democracy.

Workers are responding to the Occupy movement because it is turning national attention onto those responsible for the crisis and onto who should pay, a message the union leaders have been incapable and unwilling to push.

A taste of this feeling is clear from an interview in Labor Notes magazine: “This has really struck a nerve way up the spinal cord,” said Jason Chambers, an ironworker who has been camping out in Dewey Square since the start of Occupy Boston. “People are just fed up that there’s no accountability for these banks that got bailed out. Meanwhile our rights are under attack across the country… This is the first time I’ve seen real democracy in my lifetime, at the general assembly at Occupy Boston.”

The history of the US is one of periodic explosive strikes and revolts that have rocked the ruling class and have contained dynamic impulses toward political organisation that is independent from both Republicans and Democrats. At a time of deep crisis and very high stakes for the majority of Americans, the new alliance of the Occupy movement and organised workers has put that possibility back on the agenda. 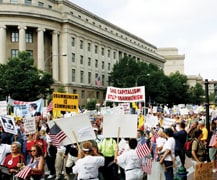