This article is over 9 years, 3 months old
The crisis in the marking of this year's GCSEs should give us one reason to be grateful: it has exposed the farce that is at the heart of our education system.
By Michael Rosen
Downloading PDF. Please wait...
Monday 01 October 2012

Bizarrely but predictably, the coalition has used this crisis to produce a dog’s dinner of a “reform” which does nothing more than buttress up a faulty apparatus. As usual, the real motor that drives educational underachievement is hidden from view.

It is quite reasonable for teachers and learners to have a method of assessing what is being understood and what skills are being acquired. It is quite another to create a system which pits pupils, teachers and schools against each other that makes a fact-accumulating approach dominate education entirely.

Resting on a foundation built by New Labour, the coalition is creating an education system which intermeshes testing, inspection and league tables. Schools are asked to compete for “customers” on the basis of their positions on league tables which are, in turn, based on the test and exam results. Yet the exam system is itself rigged.

To illustrate: when we take a driving test, we understand that we pass or fail depending on whether we can perform a given task. Now imagine that same test, where we successfully perform that task but the examiner takes your pass away to a “grader” who decides that too many people have performed that task this year, so you will in fact be a fail. The consequence of all this is that Michael Gove is building a system which mirrors capitalism: it will create its Tescos and Woolworths, its high-flyers and its failures.

One of the most repulsive aspects of ministerial propaganda is hearing their complaints about “failing schools” even though it is the system they have invented that creates them. And, of course, this system not only mirrors capitalism, but is designed to suit capitalism. It sorts children and schools into sheep and goats, successes and failures.

Gove’s and Clegg’s reform of GCSEs is a mix of rebranding, tinkering and one or two seriously retrograde steps. There are hints that they will try to rigidly fix (ie rig) the percentage of pupils getting different exam marks. Year on year improvement will be banned – a symptom of how much the right fear and hate the fact that comprehensive education and committed teachers have given more working class pupils more qualifications than ever before. They want to revert to having only end of year exams without any coursework element. People of my age (I was born in 1946) will remember how adept we became at guessing the questions that would appear in such exams.

These prioritise rote learning and eliminate true understanding or critical thinking. The government’s consultation paper admits this. It talks of preparing “more able students for further study, where they will be expected to demonstrate more independent thinking”. In other words, “independent thinking” can only be done by “more able students” and only when they’re over the age of 16!
In terms of the propaganda surrounding all this, perhaps the most pernicious are the lies peddled about international tables of educational achievement which Gove uses to underpin his reforms. We should remember that there are several different tables and they don’t all produce the same result.

Yet, politicians use the tables as a measure of this country’s educational worth, despite every piece of research the world over pointing to family income as the major determinant of levels of educational attainment, with poverty being the major factor in determining low levels. Needless to say, Gove’s data does not factor in poverty levels.

Building on this false data about “our position” in the world is something even more pernicious: the attempt by the right to claim that there is a link between a country’s high position on the education tables and its economic competitiveness.

Apart from this being an unproven and absurd suggestion, you don’t have to be a Marxist to figure out that a low-wage economy is in capitalist terms highly competitive and that this government is straining every leash to produce just that. Exam failure is a great excuse for employers to pay people less.

How ironic that Kenneth Baker – the old Tory patriarch who set much of this process in motion 25 years ago, should be one of the few people in public life to point out that the whole apparatus is out of date anyway. Within a decade there will almost certainly be full-time education and training up to 18 and the real assessment that will be needed is one which helps students decide on which courses to take, not a national grade-rigging, rote-learning, employer-satisfying, rebranded obstacle to real learning at 16. 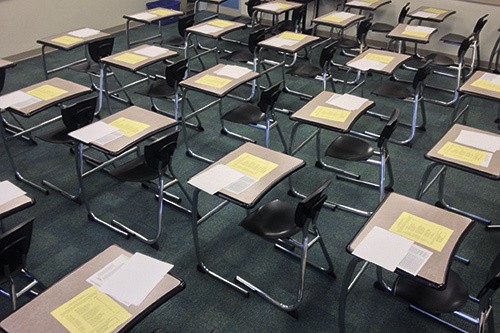 The fight for education goes on

Growing up in Goveland: how politicians are wrecking schools