The governor and Kenn Dodd

This article is over 11 years, 3 months old
When the governor of the Bank of England starts quoting madcap 1970s comic Ken Dodd it must be a sign that things are not quite right, economically-speaking.
By Kevin Devine
Downloading PDF. Please wait...
Tuesday 01 March 2011

But that’s precisely what Mervyn King did in a speech to business leaders in Newcastle on 25 January. The Dodd quote (about happiness, predictably enough) was rather less important, though, than the rest of what he had to say, which was centred on an examination of why the cost of living has risen and how this has affected people’s incomes.

It’s worth reproducing what he said in full: “The three factors I described – higher import and energy prices and taxes – have squeezed real take-home pay by around 12 percent. Average real take-home pay normally rises as productivity increases – money wages normally rise faster than prices. But the opposite was true last year [during the recession], so real wages fell sharply. And given the rise in VAT and other price rises this year, real wages are likely to fall again.

This is quite unprecedented. Given the bank’s longstanding obsession with keeping inflation in check, it’s one thing for its governor to calculate how much worse off we are as a result of wages falling behind rising inflation, but quite another to include it in a public speech.

So what’s it all about? In many ways, the governor is effectively gloating over the fact that workers have so far borne the brunt of the recession. He went on to say, “The squeeze in living standards is the inevitable price to pay for the financial crisis and subsequent rebalancing of the world and UK economies.”

But is it inevitable? That inflation – already at 4 percent (or above 5 percent, depending on which measure you use) – is set to continue to rise will make for further downward pressure on living standards.

In this context, the question of the response from workers, especially organised workers, will become increasingly important. Wage rises in manufacturing, where there has been something of a recovery, have been higher recently at around 3 percent. And, in part at least, this seems to have been as a result of pressure from below.

To give one example, a solid strike at the Heinz baked beans manufacturing plant in Wigan before Christmas resulted in a significantly increased pay offer from the company. The Heinz workers were helped by the fact that the company is highly profitable, but it’s a sign of the potential that’s there. However, whether improved wage rises can be achieved elsewhere is very much a question of confidence.

And this is where the public sector cuts come in. The cuts in services and the measures aimed at the workforce – a two-year pay freeze, widespread redundancies and an attack on pensions – represent the biggest ruling class assault on workers’ living standards in generations. In the short term, at least, the job cuts might make workers less likely to fight back over pay.

But if inflation goes on rising, as many predict it will, and planned increases in employees’ pension contributions go ahead, reducing take home pay further, you begin to have some of the ingredients for a serious industrial response.

There’s one more thing here. Ken Dodd is not just a comedian. He also happens to be a Tory, who introduced Thatcher to the faithful at the party’s final election rally at the Wembley Arena in 1979. Maybe Mervyn thought that quoting the King of the Diddy-men would be a clever way of signalling his deficit-slashing credentials to other true believers.

When you consider that government spending is normally an important factor in economic growth, the cuts – allied with weak business confidence and the continued crisis in much of the eurozone – present real risks for the government’s strategy, politically as well as economically.

But the stakes are even higher for our side. It’s about time we told Dodd (and King) what to do with those tickling sticks. 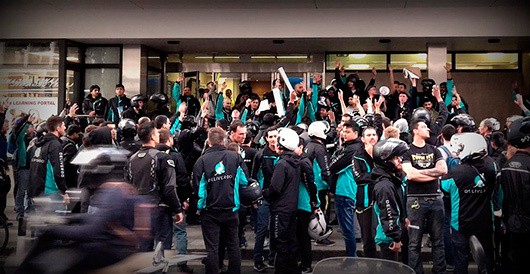 Why the price indexes miscalculate the cost of modern life