The film tells the story of the Grand Budapest Hotel – not in Budapest but fictional Zubrowska – throughout the 1930s. It focuses on the actions and adventures of Gustave H (Ralph Fiennes), a hotel concierge who is obsessed with comfort, detail and his older female clients. His tale is recounted by Zero Moustafa (Tony Revolori), a young lobby boy and Gustave’s loyal right hand man.

Following the death of one of Gustave’s favourite customers, he is left an expensive painting in her will. Her family, headed by the formidable Dmriti (played by a suitably moody Adrien Brody), do whatever they can to block Gustave and his path to fortune. What follows is part art heist, part prison breakout and part murder mystery.

Throughout are hints at a changing world. The ZZ troops attack the immigrant Zero on a train journey before taking over the hotel in the final scenes. There is constant suspicion, change and melancholy. But this film takes it all in its stride.

Although the plot may sound complicated, this is storytelling at its most straightforward. Packed with great dialogue and lots of silliness, Anderson manages to simplify what may seem initially overwhelming.

Much is made in the film’s publicity of the all star cast and it does seem that Anderson has filled every space with some big name or other.

Bill Murray, also featured in Anderson’s acclaimed The Life Aquatic with Steve Zissou, plays a concierge who helps out at a particularly sticky moment. Saoirse Ronan, the celebrated young actor who first appeared in Atonement, appears as Zero’s nice but dim girlfriend Agatha.

But this film is really all about the relationship between the two central characters and both Fiennes and Revolori deserve high praise for their performances.

The character of Zero is particularly wonderful – brave, loyal and really good fun all rolled into one – and newcomer Revolori seems one to watch for the future.

The Grand Budapest Hotel doesn’t disappoint when it comes to Anderson’s wonderful eye for style.

From the eponymous building, the hotel uniforms and the snowy scenes, right down to the cakes that aid a prison break out, the film’s feel is detailed yet playful. It manages to combine faded glamour with the sometimes sinister feel of inter-war Europe.

Lots of style, lots of substance and surprisingly lots of fun, watching this film is a really enjoyable way to spend a couple of hours. 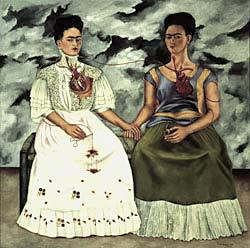 The passion and the politics of Frida Kahlo