Healthy signs of resistance in the NHS

This article is over 11 years, 2 months old
"Day X for the NHS" on 9 March saw, for the first time in over a decade, 1,000 health workers taking to the streets of London. They came in scrubs and white coats, marching past the banks chanting, "Our NHS is not for sale, put the bankers into jail!"
By Julie Sherry
Downloading PDF. Please wait...
Friday 01 April 2011

At its head were medical and nursing students, joined by a wide range of other health workers. From the name of the protest, Day X, to the vibrancy of the demo, it had all the hallmarks (although on a smaller scale) of last year’s student demonstrations.

The Day X mobilisation represents a significant breakthrough. It comes after years of the key health union, Unison, avoiding any fight in the NHS as it put its loyalty to the Labour government ahead of everything.

It shows how, even in areas where there has been little militancy for years, things are beginning to change.

The initiative for the demo came from rank and file health activists. It followed successful 300-strong demonstrations outside two east London hospitals, Homerton in Hackney and the Royal London in Whitechapel, over cuts in the previous month.

The scale of the attack on the NHS, which faces an estimated cut of 50,000 jobs to meet the government’s demand for £20 billion in savings, is producing a wave of anger across the health service. David Cameron’s promise before the election to protect the NHS is only inflaming matters.

Of course the mood among health workers is uneven. In many places workers are not confident to fight. But the 9 March protest showed the potential for resistance. 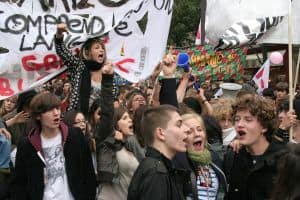