This article is over 11 years, 7 months old
Henry Moore's monumental artworks adorn forecourts and public spaces around the world. In this review of Tate Britain's new exhibition of Moore's work, John Molyneux discusses the political trajectory of his art, revisiting the radical origins of this famous artist.
By John Molyneux
Downloading PDF. Please wait...
Tuesday 01 June 2010

Tate Britain, often overshadowed by Tate Modern, is well worth a visit at the moment. In addition to the permanent collection of Turner masterpieces, and the changing but always rich selection of 20th century art, there is currently a substantial Chris Ofili show and an especially interesting Henry Moore exhibition.

Both Ofili and Moore are examples of the artist who begins as a rebel and radical and ends up embraced by, and embracing, the establishment. In the essay “Art and Politics in Our Epoch”, Leon Trotsky rightly identified this as a general tendency under capitalism: “Bourgeois society showed its strength throughout long periods of history in the fact that, combining repression and encouragement, boycott and flattery, it was able to control and assimilate every ‘rebel’ movement in art and raise it to the level of official ‘recognition’.”

In the case of Moore the incorporation, literally by the corporations, was so thorough that his radical origins are often forgotten. The merit of this exhibition is that, while it does not confront this issue directly, it nevertheless reflects it by showing examples of work from throughout Moore’s career, rather than just from the more conservative latter part.

Like many modern artists, one of Moore’s chief original sources of inspiration was so-called “primitive” art, ie art from outside or before the main European tradition, found, as he put it, in “the darkest corners of the British Museum”. This proved both a strength and a potential weakness. Just as Picasso was able to use the forms of ancient Iberian and African sculpture to break with the bourgeois tradition of naturalistic representation and create a new way of painting in cubism, so Moore used the influence of Ancient Egyptian and pre-Columbian sculpture from Mexico to forge new forms of sculptural representation of the human body.

At the start of his art career in the late 1920s Moore lived on Parkhill Road in Belsize Park, north London, among a nest of the avant garde including Barbara Hepworth, Roland Penrose, Naum Gabo and radical art writer Herbert Read. This led to a productive interaction between the influence of the “primitive” and new developments in modern art such as constructivism and surrealism, as can be seen in works such as “Reclining Woman” (1930) and “Stringed Figure” (1937).

But at this point Moore’s sculpture was the subject of considerable press and public mockery. His statues were attacked for having holes in them and resembling blocks of Emmental cheese. When Roland Penrose put a Henry Moore in his garden in Hampstead the local residents (in Hampstead!), backed by the local paper, set up a protest campaign.

Moore’s reputation and popularity were established not by his sculpture but by his drawings in the Second World War, when he was commissioned as a war artist by Kenneth Clarke, then director of the National Gallery, and produced a powerful series of drawings of East Enders sheltering from the Blitz in the London underground. At this time the British ruling class was reaching out to the working class to secure their cooperation in the war effort. This took a number of forms: coalition with the Labour Party in government, the Beveridge Report and the shift to the welfare state, some redistribution of wealth, and a number of cultural initiatives of which this was one. The use of the Tube stations as bomb shelters was a political issue: it had to be fought for and won by working class people themselves through factory occupations.

Moore responded strongly and sensitively to this situation. He was distressed by the poverty he saw and compared the rows of sleepers to the slaves packed into the holds of ships on the middle passage. In the same period he also produced moving depictions of miners – in some ways the visual complement to George Orwell’s famous description in Down the Mine. (Moore came from mining country in Castleford, Yorkshire, and his father was a mining engineer.)

These drawings established Moore in the public eye but it was in the post-war period that he achieved international artistic superstardom. As the postwar boom took off there was a big demand from corporations, governments and other institutions for monumental public art. Moore’s giant reclining figures, mother and child and family groups and abstract “natural” forms fitted the bill admirably. Commissions flooded in and Moore, hailed as the new Michelangelo, found his works adorning forecourts and plazas around the world.

In these circumstances two aspects of Moore’s art came to the fore. First, his attraction to ancient non-Western sculpture lent itself to an essentialising tendency in his work. The almost invariably female reclining figures became “eternal” earth mothers. The mother and child statues and the nuclear families (and sometimes kings and queens) became “universal” human families. Second, this was reinforced by his use of natural forms – rocks and pebbles shaped by the sea, branches bent by the wind, etc – as a basis for his giant bronzes, and wood and stone carvings (represented in this exhibition by four massive Elmwood pieces).

The bourgeoisie in general wants to present bourgeois social relations – the wage labour/capital relation, the private property relation, the nuclear family relation, etc – as universal and transhistorical. Similarly, it likes to see art as transcendental, “spiritual” and fundamentally outside history and politics. Moreover, there was at this time a particular ideological drive to reconstitute the traditional nuclear family after its partial disruption by the war (women working in the war industries, a degree of sexual liberation, etc). This was also the cultural moment of Brief Encounter, of the Family of Man photography exhibition and of the Ideal Home Exhibition.

It is highly unlikely that Moore intended, or was even aware of, this ideological deployment of his art, any more than Jackson Pollock intended the use of abstract expressionism as a CIA weapon in the Cold War. Moore became very wealthy but he lived relatively modestly, channelling most of his money into his sculpture foundation and refusing a knighthood. Nevertheless, it is clear that in the 1950s his art fitted the cultural needs of the bourgeoisie like a glove.

It is also evident, I think, that in the process his work suffered. As the rate of production increased and as it became more and more “universal”, so it became less and less grounded in any concrete reality, less and less a response to any actual social relations or experiences. Moore was and remained a great craftsman, with a powerful sense of form and of the potential and limitations of materials. But the huge sculptures became more and more repetitive, more and more banal, to the point where George Melly produced the satirical ditty, “Please don’t make any more, Mr Moore”.

The Tate Britain show does not focus on this trajectory, still less explain or analyse it, but it does at least allow us to see it.

The Henry Moore Exhibition will be at Tate Britain until 8 August.

Interview of the Month: Reliving the War in an Irish Town 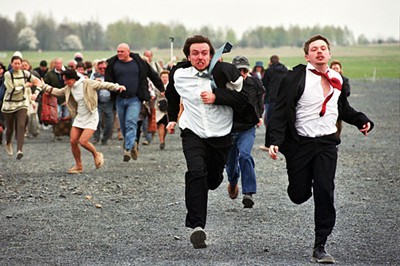