10 September. Write that date in your diary NOW. If you can afford it, book a holiday; if you can’t, stock up with sick-bags. You will need them because on that day the Invictus Games will begin. You have been warned.

If you believe the hype, these “Games” were the brainchild of Prince Harry, but in reality they are a copy of the “Warrior Games” held in Colorado last year. Men – there are no female “heroes” apparently – who have been mutilated in the NeoCons’ wars in Iraq and Afghanistan will have a run around and a kick about.

Meanwhile the press and TV will whip the country into a frenzy of flag waving patriotism that will bring a tear to Nigel Farage’s eye.

There will be 300 disabled athletes from 14 “coalition” countries competing in a variety of para-sports. The climax of the event will be the Abu Ghraib Mile when contestants will be attached to the national grid, waterboarded, covered in a black hood and then charge round the track while the crowd pour the crudest racial abuse on them. Just like the old days in Afghanistan.

Astonishingly these “games” are being held in the Olympic Stadium over four days. Tickets are on sale at 12.00 a pop and there will be live wall-to-wall coverage by the BBC. The cost is being underwritten by a special grant from George Osborne alongside sponsorship from Land Rover, British Telecom and Jaguar cars.

It is especially fitting that Land Rover is paying for some of this as a parliamentary report last year established it was the inadequacies of the Land Rover Snatch vehicle that led to so many of these men being maimed in the first place.

For the ruling class of this country the Invictus Games serve two important purposes. Firstly they address the question of (in Frank Zappa’s words) The Idiot Bastard Son. What can be done about Prince Harry?

Since he has proved himself to be so utterly useless at everything else, these games are being used to give Harry’s image a make-over.

We are supposed to forget his repeated racist outbursts – calling a Sandhurst cadet a “little Paki”, his sexual excesses and his all-round douchebaggery. At the Invictus Games Harry will be centre stage in his uniform – no, not the Nazi one – as the Warrior Prince. Yeah, right.

The PR story will be about a princely “hero” who served “on the front line” in Afghanistan. Except “Harry Wales” actually spent his four months in Afghanistan entirely at Camp Bastion, several hundred miles from the Helmand “front line” where his job was to ensure that returning helicopters landed and parked efficiently. He was in fact an RAF Traffic Warden. That’s the uniform he should wear at the games.

But for the Tories and their New Labour homeboys these games have a second purpose. Despite all their dodgy dossiers and carefully pureed lies, and despite the support of every TV channel and virtually every national newspaper, the New Jingoists have never succeeded in making their wars popular.

Time and again opinion polls show that a majority of the population want nothing to do with Blair, Brown and Cameron’s imperial adventures.

So they are trying a new strategy. If they can’t make their wars popular, they will make the men who fight them popular instead. Simple.

The hypocrisy in this is really quite breathtaking. First these warmongers send thousands of young working class men to fight their filthy wars, while none of their own sons go anywhere near the fighting.

Then, when they are used up and broken, they come home to be sacked from the armed forces, evicted from their service homes and forced to live on benefits where they are treated with exactly the same spiteful contempt as every other claimant today.

An article in the Independent in May told the real story. Under the headline, “Betrayal of our wounded veterans: ‘I served my country. Then they turned their backs’,” the article quoted a soldier: “‘Once we are no use to them, they just turn their backs. They don’t want to know,’ agreed former Sgt Jean Reno, 39, who has also been told his benefit is being withdrawn as he is fit for work despite severe brain injuries”. Sgt Reno will not be competing in the Invictus Games.

Two hundred years ago the radical poet William Blake got it exactly right in his prescient poem “London” when he wrote:

And the hapless soldiers sigh/Runs in blood down palace walls.

But I have a dream of a slightly different scenario for the Invictus Games. In my head I can hear the commentary already: “And the Afghan champion wheels up to the line and he releases his javelin… It has been caught in a sudden gust of wind… It’s headed straight for the Royal Box… Oh no, there is blood everywhere”.
Now that would be worth watching. 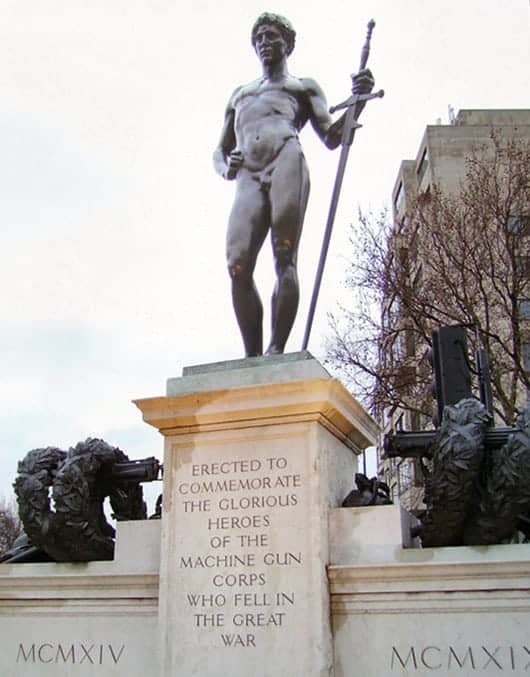 Kick over the statues