This article is over 8 years, 7 months old
After provoking even headteachers to heckle him, Michael Gove's plans for a new curriculum for school history look to be in trouble. Andrew Stone looks at the growing campaign against them
By Andrew Stone
Downloading PDF. Please wait...
Saturday 01 June 2013

It is quite an achievement to provoke a conference of headteachers to heckle you, but education minister Michael Gove has never been short of personal ambition. The high-handed arrogance which has characterised his treatment of teachers and schools, and which prompted the backlash from the recent NAHT conference, is equally evident in his plans for school history.

And the response has been similarly negative. All the teaching unions, the Royal Historical Society, History UK, the Muslim Council of Britain, the Black and Asian Studies Association, Curriculum for Cohesion, the Schools History Project…these are just some of the organisations that have attacked the draft plan for the curriculum that was released in February.

The Defend School History campaign was formed in response, launched with a successful seminar of 60 teachers and students in April. The Historical Association [HA], which represents thousands of history teachers, polled 1,600 of them – and just 4 percent viewed the plans positively.

Content overload is a key problem. Of teachers surveyed, 96 percent think the curriculum is too prescriptive. There are 128 bullet points of required content, as well as 68 historical figures. At key stage 2 (ages eight to 11) this involves the ancient Greeks and Romans, then an extraordinary rush through “British” history from Stone Age settlements to the 1707 Act of Union.

The vast majority of primary teachers are not history specialists – most received a few hours of subject-specific training at best. So how can they reasonably be expected to command detailed knowledge of tens of thousands of years of human history – alongside every other curriculum subject? And how long will they have to develop this encyclopaedic account?

The Qualifications and Curriculum Agency recommends 4 percent of curriculum time is devoted to primary history. This amounts to just 132 hours for the post-infant rush through the ages. At best students will cover about 60 years per hour, which is almost fast enough to be a disgraced Lib Dem energy minister.

Gove’s insistence on sequential teaching means that much-loved primary projects into the Victorians and Second World War will be dropped, on the spurious grounds that this will aid chronological understanding. Yet as historian Richard Evans wrote in the New Statesman, “the recital of one event after another will not help children understand change over time; to do that, they need to compare and relate events with each other and with their contexts.”

This, however, suggests a much more child-centred and skills-focused pedagogy than Gove is willing to envisage. In place of an enquiry-based approach that encourages students to think critically, Gove has created a pub-quiz primer based mainly on political and military history – “how the British people shaped this nation and how Britain influenced the world”.

There is no reciprocal requirement to understand how the rest of the world has influenced Britain; for example, for the study of the Islamic civilisations that helped to transmit and develop the learning of ancient societies. It is a nakedly insular, anglocentric curriculum that only encounters Africa to enslave it and China to colonise it.

As even one of Gove’s consultants, failed Tory candidate Steve Mastin, recognised: “As far as I am aware, we will be the only jurisdiction in the Western world that won’t teach world history.”

Can we expect the overwhelming criticism of the curriculum draft to lead to meaningful revisions? In a recent speech to the National College for Teaching and Leadership, Gove suggested that “all schools can ask to disapply any aspect of the national curriculum if they feel they can do something better and more appropriate for their children.” Academies do not even have to make this request – they can, in theory, just ignore it.

So if Gove is relaxed about schools not following his curriculum, why has he picked a fight? Perhaps he thinks there is political capital to be gained from it with the Tory right, who he hopes will propel him, as they did his heroine Margaret Thatcher, from education minister to party leader. Historian and Labour MP Tristram Hunt suggests it could also be designed to rally the eurosceptic troops for a no vote in a future EU referendum.

Since the national curriculum was first introduced 25 years ago, history teachers have become very good at subverting the worst aspects of it. Indeed, the HA survey suggested that only 7 percent thought that their school “will follow the new history curriculum and the currently proposed content closely”.

But we have yet to hear details of assessment arrangements – will they depend on the new curriculum? And will Ofsted grade schools according to how closely it is followed? And will Performance Related Pay be linked to these measures? If the answer to these questions is “yes” we could see academies opting in rather than LEA schools opting out.

So it would be unwise to be complacent. The Defend School History campaign is planning further meetings and a conference, a pamphlet and lobbying MPs. If needed, I believe we should put the case for boycotting the new curriculum. Because, as Orwell famously pointed out, “who controls the past controls the future.” And we cannot afford to let Gove control either.

To get involved in the campaign email [email protected]

A vision for education

The right to learn 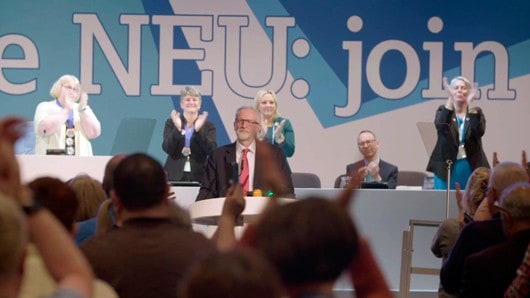