The History of White People

Sometimes you come across a book that makes you gasp, “Well, I never knew that!” This is one of those books. Although written by a distinguished academic it will be of interest to a wide audience. The book refreshingly contains images and pictures that help tell the complex, but readable and fascinating, story of whiteness and thinking in terms of race.

The book is a grand sweep of history from the Ancient Greek view of Scythians and Celts (essentially, most people in Europe today) as savages to 20th century US laws that separated people by race, to the first US census of the 21st century that allowed people to choose one or more of 15 “racial” identities.

It shows how the roots of the association of whiteness with beauty can be traced back to the influential work of Johann Joachim Winckelmann in the 18th century, whose work inspired 18th and 19th century racial theories. His ideas of beauty were based on Roman imagery of the Greek world that portrayed the Greeks as pure white (reflected in Roman statues that used white marble and plaster left unpainted). This was one of the “Well, I never knew that!” moments for me.

The Dutch illustrator Petrus Camper (1722-89) used drawings to classify humans and primates based on facial angles. While he argued this showed the strong similarity among humans, this was not the message taken up by others. Painter suggests the basis for the distortion lies in the placing on the chart of an image of a black person next to the orang-utan/chimpanzee. Coming at the height of the Atlantic slave trade in the late 18th century, this imagery became embedded in anthropology. While Painter does not make enough links between the rise of capitalism and racism, it was in this period of unprecedented capitalist expansion that 19th century racists popularised the notion that race determined some people as naturally superior to others. This was used to justify the enslavement of millions of black people, the legacy of which contaminates much of our life today.

The book then moves on to look in some detail at the spread of the notion of whiteness and Anglo-Saxon superiority in US history and immigration. While society has come a long way (the American Association for the Advancement of Science declared only in 1995 that scientifically race as a concept tells us nothing) Painter makes it clear that science and the growth of a multicultural middle class have not resolved the matter of being seen the world through the prism of race in the media and elsewhere.

This is largely a fascinating history book and the story it weaves helps us understand some of the origins of the idea of whiteness and racism today.

The ambivalent legacy of Free Cinema 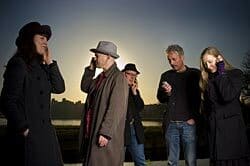 Go to the Devil and Shake Yourself - Sergeant Buzfuz