Hong Kong is not an oppressed nation

Hong Kong chief executive Carrie Lam’s withdrawal of the Extradition Bill is a victory. And the protestors’ four other outstanding demands are entirely achievable within the framework of “One Country Two Systems” (OCTS) political agreement between Britain and China that governs Hong Kong.

One consequence of the 1967 riots against British rule, where 5,000 were imprisoned and 52 killed, was the acceptance that Britain could not hold Hong Kong after the lease on the New Territories expired in 1997. The formation of the Hong Kong identity coincided with Britain embarking on a massive expenditure program in order to make the colony a better place from the rest of China.

The OCTS was an agreement that enabled the continued development of capitalism in Hong Kong and in China. Hong Kong has been China’s window to the world economy, and remains the region that is most closely integrated to international capitalism.

The development of a national identity in Hong Kong, however, takes place amid the decline of its contribution to China’s economy. One estimate has Hong Kong’s GDP amounting to 20 percent of China’s in 1997 but only 3 percent today.

There has also been an increase in racism in Hong Kong against mainland Chinese people. The material basis of this racism is not colonial domination but competition within capitalism.

Those backing a separate Hong Kong identity emphasise its connections to Western capitalism, rejecting equal status for Mandarin as a lingua franca connecting it with 1.3 billion Chinese, and preferring instead to develop its proficiency in English in order to better serve the international business community. The tiny minority of far-right nativists want to adopt English and Cantonese as the criteria for Hong Kong citizenship, thereby disenfranchising Hong Kongers who are Hakkas and Fujianese speakers.

Self-determination is a left cover for independence. Even universal suffrage is a reform that can be won since China wishes to extend OCTS to Taiwan, which has universal suffrage. Reforms can clearly be fought for and won in Hong Kong without system change.

Self-determination is also a reactionary demand because it will place Hong Kong fully within the American camp. In the past 15 years, Hong Kongers have suffered stagnant living standards while mainland Chinese have seen their personal incomes triple. Self-determination also maintains the division between workers in Hong Kong, and is an obstacle to mainland Chinese students studying in Hong Kong from uniting with the Hong Kong students over reforms.

The Hong Kong left has a proud history of participating in struggles in China. But we do not have to go to Wuhan in order to unite with mainland Chinese because there are hundreds of thousands of them already in Hong Kong. Revolutionaries should be able to win Chinese over to struggle for reforms while maintaining that Hong Kong is part of China.

A Casual Attitude to Workers' Rights 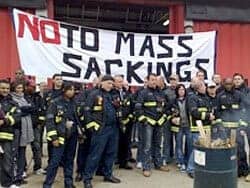